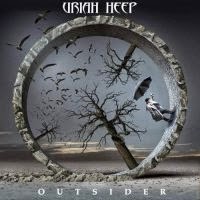 Yabba-dabba-doo? Fair enough. Let's not do the Flintstones and woolly mammoths repertoire since it's just as stupid as going after kids for being young. However. Uriah Heep are still releasing new studio albums and going on sort of strong after the +45 years in the music business. RockUnited.com enjoyed their previous release at Frontiers and 'Outsider' is sadly one or possibly two step in the wrong direction. Not as much the outsider than out in the woods and lost amongst all the paths that lead to Hammond.

To each great tune, there's one not-so-great track and especially this (Rock The Foundation) had us screaming for the skip button, Quote, "Baby's gonna rock the foundation. Cos' baby's got a lot to share. Baby's gonna cause a sensation. Cos' baby's wants a love affair", end quote. Blimey. And you thought that merely your non-English act wrote dodgy lyric? Yours truly came up with similar stuff at the age of 13 and apparently you can do the same if you're from United Kingdom and older than Merlin and co. That's a bit harsh? You say? Yeah, but, c'mon... the song is duller than a dull old thing such as dull old former President Bush (J.R.) on dope.

Clearly not their best work and the album is something of a hit and miss thing with two sides of the coin. There's still a proper spark in the dark every now and then and the Hammond attack of opener "Speed Of Sound", classy and definitely Heep. The piano opening of "One Minute", gets you in the heart and lyric-wise, much better, but still no home run. "The Law" is unfortunately one huge step in the wrong direction. The chorus part is hardly worth the trouble. Good stuff ahead though. "Is Anybody Gonna Help Me", feature the classy vocal performance by Bernie Shaw and the Hammond is upfront and booming. Very nice and I really like this track. I probably shouldn't type this, but it's Deep Purple-ish somehow? Great stuff nonetheless.

"Looking At You", yet another great tune with the signature of Mick Box and again the Hammond at the centre of attention. "Can't Take That Away", Heep at their best with close to galloping style and one of those choruses to shout along to. "Jessie", simplicity at work and could just as easily have been the catchy pop tune, if not for the roaring Hammond and excellent guitar solo by Box. It's weird though. The last 6 tracks on the album are all great fun and the first 5 are so-so, meh, and whatever.
www.uriah-heep.com
Posted by ROCKUNITED.COM at 9:44 PM