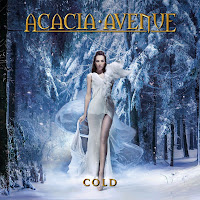 The term Acacia Avenue is actually a cliché in British culture, a metaphor for an average middle class suburban street. Receiving this album by a band of that same name immediately harkens me back to Iron Maiden’s Number of the Beast album and, of course, the song “22 Acacia Avenue”. I wondered if this would simply be a clone of that iconic British band, as if we needed another of that ilk. Happy to report that this band, called Acacia Avenue, is not cut from the Iron Maiden cloth.

This band who issued their initial effort in 2010 is back now with Cold and perhaps “band” is not the correct term. It seems more of a one-man show with Danish creator Torben Enevoldsen handling the writing, guitars, bass, keyboards and some background vocals! Aside from the roster of guest vocalists, a new/different voice on each track, the only other musician credited is drummer Dennis Hansen. The vocal guests read as follows: Rob Moratti, Steve Newman, Album Ljungqvist, Mikael Roupe, Torben Lysholm, Peter Sundell and Nicklas Sonne. The music is very melodic hard rock/AOR sounding with some selections being a little more “poppy” than others and had my interest piqued from the opener of “Time”. Two of my top picks of the effort are both Steve Newman sung selections, “Time” and “Angelina” which features a catchy vocal chorus. Others worth mentioning are: “You and I” (Mikael Roupe), “Love Will Survive” (Rob Moratti), “Calling Out” (Nicklas Sonne) and “Freedom From Doubt” (Peter Sundell).

The Tubes cover, “Out of the Business” featuring Mikael Roupe’s vocal talents is another stand out track, actually I’d venture to say that there’s not a bad composition in the lot!
I’ll be searching for the self titled debut immediately!
Website