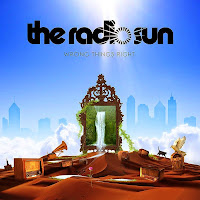 Did you ever heard Square One, the Australian rock band? I did, and quite liked them. The band disappeared from the radar a few years ago, but now most of the band members have resurfaced in The Radio Sun. Vocalist Jason Old, guitarist Steve Janevski and drummer Ben Wignall are continuing with bass player Robbie Erdmanis, and it seems that their mission is still the same - to write instantly catchy, timeless power pop tunes.

The band has a sound that takes influences from the past decades yet doesn’t sound too retro. Take the title track which opens the album for instance: it starts with smooth accapella harmonies, followed by some crunching guitars and swirling keys that remind me of Cheap Trick. The verses are very melodic with Jason Old sounding a lot like Vega’s Nick Workman, while the chorus is pure harmonious bliss.

You can hear that the boys have been listening to a lot of Rick Springfield, Nelson and Butch Walker’s work, combining these influences to a very appealing style of their own. Almost each one of these songs sounds like a potential summer hit, but if I were to pick up a couple of ”most likely to succeed”, I’d vote for the aforementioned title track and ”Summer Girl” with its’ gigantic melodic hook.

The album’s only downfall is the fact that some of the songs sound a bit alike, but since they’re all good, that’s hardly a big thing. ”Wrong Things Right” is one of the most stunning debuts of this year and it really should find a bigger audience that just us melodic rock diehards. Radio people, hello? Are you awake? Summer hits here, ones that do not irritate!

Posted by ROCKUNITED.COM at 7:11 AM