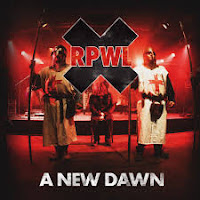 The best German (Bavarian) prog rock band RPWL celebrates their 20th anniversary with the release of their new album called A New Dawn. Their last concept album Wanted (2014) is played from the beginning till the end and the spectacular show is completed with The Fisherman and Unchain The Earth (only on CD) from the album Beyond Man And Time (2012), Still Asleep (bonus track on Wanted)  and Hole In The Sky from The RPWL Live Experience (2009) (also only on CD).

A New Dawn was recorded in RPWL's hometown Freising in October 2015 and this amazing concert is now released as double CD, double LP, Blu-ray and DVD. A New Dawn is a truly amazing live show of one of the best prog rock bands on this planet and the musical highlights for me are: The Fisherman, the longest song on the CD and probably one of the best RPWL songs ever, Misguided Thought, with a spectacular guitar solo from Wallner, who is by far the most underrated guitar player of the world! The Attack, another rather long song, is again dominated by the guitar work of Wallner and A New Dawn, the last song, is also one of my favorite RPWL tracks, a fascinating power ballad with great lyrics. Hole In The Sky, the oldest song on the album is again a superb piece of prog rock music that only RPWL can produce, as these guys really are a brilliant band.

As I said in earlier reviews about RPWL, these guys are the future of modern prog rock and on this spectacular live album Lang, Wallner, Jehle, Taus and Turiaux musically peaked again! A must for fans of melodic prog rock music, one of the best live albums I have heard this year!
Posted by ROCKUNITED.COM at 8:10 PM No comments: