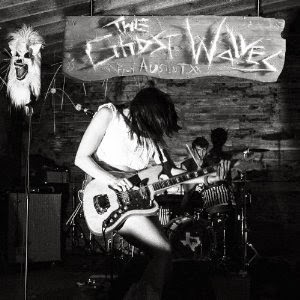 Since you already have the big, the bad, the hungry, cry, ordinary, and various sport teams. Why not the Ghost? Coming at ya' - not in pack but as the married couple of Carley (vocals/guitar) and Jonny (drums) armed with fury licks and clawy tricks, the duo goes for the jugular with stompy delta blues and loud indie/garage rock. I'm not entirely sure if the 'blues only' fan will appreciate this particular duo of Wolves though?

It's perhaps just too quirky and punky/indie at times and you definitely need to enjoy the outlandish rock of (early) The B-52's, The Fall, White Stripes, as well as the old delta sound of yesterday and year. Carley Wolf is the evil Betty Boop kind of vocalist with as much attitude and hunger as the entire team of Wolverhampton (bring back Steve Bull now!). The band's ferocious, primal sound with nothing but a four-piece kit and an electric guitar takes you waaay back in time and has nothing in common with your modern era production or fake azz musician. It's pure, honest, raw, and very much down to earth.

It's the utter fun album effort featuring 13 tracks recorded in US of A and Austin's Arlyn Studios (Ray Charles, Stevie Ray Vaughan, etc.) and mastered by Howie Weinberg (The Clash, Nirvana, The Ramones). I really can't pick any favorite tracks since I truly enjoy them all and the bare-bones riffery and slide gets you right between the eyes. It's hardly the guitar work of the fast shredding influenced six-sting bender though. Recommended.
www.theghostwolves.com
facebook
Posted by ROCKUNITED.COM at 9:54 PM