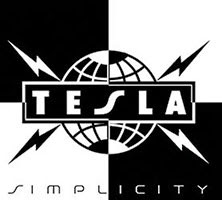 Blimey. What ever happened to uptempo or at least the minor change of pace? Listening to Tesla's new album, "Simplicity", it's all mid tempo and with your cruise control at full swing. The first couple of tracks (MP3, Ricochet) drag its heavy load like a 18-wheeler on a slow-ride across the universe and the moment sadly never touches the greatness of past albums. True. Simplicity is something we all strive for in this modern world of technology and stress. But I'm not pleased with the songs and I wish they could just pick up the pace. Opening tracks are important after all and these two are sadly not the great pair. It's basically Tesla on dope and I don't like it.

There's no need for any major concern though. Well, not if you enjoy the laid-back stuff anyhow. Good, but, slow and mid tempo, tracks are coming at ya' next in the form of "Rise and Fall" and the ghost story. "So Divine", grabs you by the throat and never let go as they build up the moment with the acoustic guitar intro, catchy hook, and smoking hot guitar solo. "Cross My Heart", the piano boogie rock of Rod Stewart and The Faces or if you prefer The Quireboys? Good stuff, pretty slow (again), and give the feeling of a smokey bar way out in the bush. "Honestly", the fine semi-ballad with a sort of uptempo chorus, but not quite. "Flip Side", the bluesy B-side of the story and not the best of tracks to be honest.

"Other Than Me", yet another ballad and "Break Of Dawn" is finally sort of uptempo and Rhino Bucket/X-Sinner-ish with a guitar bridge from Aerosmith and Dream On. What's next, you ask? Well, another ballad of course, "Burnout To Fade", however, this is probably the best track off the album. "Life Is A River", surprise, surprise, it's a ballad! "Sympathy", the mid tempo track with tasteful guitar work and boring chorus part. "Time Bomb", may sound like it's going to explode in your face? it's yet another ultra slow-ride with a heavy load like the opening two tracks. The closing track, "Til' That Day", you guessed it, ballad again.

The bottomline: Don't expect this to RAWK since it's basically wild rockers of the past gone old and toothless? It's still a neat album, if you enjoy the laid-back schtuff.
www.teslatheband.com
facebook
Posted by ROCKUNITED.COM at 9:50 PM