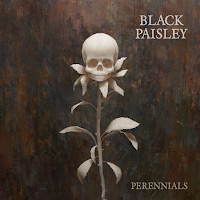 Call me old-fashioned, but I'm pretty impressed by the Black Paisley promo package: a CD, a good-looking 7" single-sized info letter and coasters! It's rare that I get any physical promos these days, it's mostly just links to downloads and there's so many of those that it's overwhelming. It takes some effort from the band to put together something like this, and for this they have to be applauded. They certainly stand out from the competition with this.

A nice package doesn't guarantee that the music inside is any good, but I'm glad to say that Black Paisley have got that covered too. "Perennials" is their second album, the first being "Late Bloomer" (2017). The name of the debut reflects the fact that the guys in the band have been around for quite some time, and the name of this album suggests that Black Paisley will bloom year after year... Horticultural Rock, anyone?

The leader of the band is vocalist/guitarist/main songwriter Stefan Blomqvist. He has a cool, raspy voice similar to another Swedish singer, Jan Johansen.  At times he uses his vibrato in a way that reminds of Chris De Burgh.

Let's check out some of the album highlights: The heavy rocker "I Want Your Soul" which opens the album is definitely one of those, it has a bit of a Europe-vibe ("Superstitious") and a big, stomping chorus. "Sometimes" is a classic rock ballad that wouldn't be out of place on a Gotthard album, while "Without You" is another ballad that has touches of Bryan Adams and Def Leppard. "Trying" takes us back to the early eighties with its' Uriah Heep/Rainbow stylings, but with "Out Of My Life" we're back in the "now", yet still firmly rooted in classic rock!? I also have to mention the delicate, piano-driven ballad "Stronger", which is a beautiful piece of songwriting.

As you may gather from the above, "Perennials" is a diverse album. Yet it's an album in a good old-fashioned way, there's a common thread in the songs.