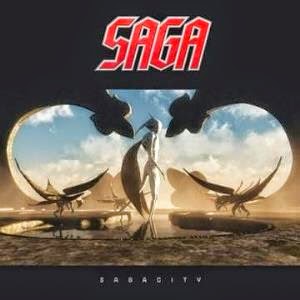 All praise to the Sage and not to mention Sagacious person who came up with Sagacity as title for the brand new Saga album. What to expect from the classy Canadians on their forthcoming album? - a little bit of everything really? Indeed. Saga, truly your pizza and pie version of complexity and rock. Have another slice of Prog-Rock or why not the New Wave-ish salad as your side-dish? So many different levels and elements of music and each section just as important to their overall sound.

You have as always the distinctive and very excellent voice of Michael Sadler, the extensive keyboard attacks and arrangements, the classy guitar work, the interesting and groovy bass lines, and last but not least, the caged animal behind the kit. You know, their characteristic sound. However, they add a modern touch to their arrangements this time and it's perhaps more of the complex album than previous effort. With this in mind not much can go wrong if you enjoy the Saga. Here's the quick track-by-track:

Opener, "Let It Slide", reminiscent of Worlds Apart and Heads or Tales only groovier and featuring biting guitar work. "Vital Signs" show the artistic side of Saga. "It Doesn't Matter Who You Are", Gilmour gets to shine with an excellent performance. "Go With The Flow", one of those song structures that Yes experimented with in the early seventies and Saga completed in 2014? "Press 9", space rock met 80's New Wave? It's clearly one of their most quirky songs as of lately. Merely the atmospheric (spacey) keyboard in the background, the laid-back guitar work and those vocal harmonies. "Wake up", completely different and aggressive in comparison to previous track. The chanting vocal line (Wake Up!) and the short number (2:34 min.) work as your... ehem, yeah, Wake Up call.

"Don't Forget To Breathe", based around Ian's guitar line and riff, it may just lack a proper chorus part? "The Further You Go", mesmerizing... if you're tired of listening to the commercially side of music. "On My Way", pull out some huge eighties like arrangement and structure from their massive back catalogue without sounding too similar or samey. The keyboard/guitar interlude do the trick and it's just a superb track. "Luck", the return of the synthesizers. The epic closing track, "I'll Be", acoustic guitar intro followed up with teardrop-like ebony and ivory work and the powerful and catchy refrain. Pay extra attention to Crichton's perfect tone and solo here.

The only problem with Saga and Sagacity? They already have so many classic tracks and albums. They're fighting their own legacy so to speak and it's always difficult to please everybody. Damn solid and fine effort as always though. Or as Michael Sadler puts it: "For me this album marks a return to many of the signature elements that put Saga on the map at the onset of the band's career, while maintaining a firm grip on the here and now. The balance between past, present and future is the key and I think that's what we've managed to achieve. Quite simply, this is Saga... 2014"!
www.sagaontour.ca
Posted by ROCKUNITED.COM at 4:04 PM