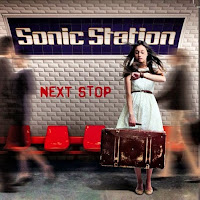 This is the second album from Swedish AOR group Sonic Station. The band has slightly toughened up their sound compared to the pop/westcoast-flavoured first album, which in my books is a good thing. Fans of the debut should not worry though, ”Next Stop” is still very much a ”soft rock” album, it’s not like than band has turned to metal all at once! The guitars are just more upfront, the overall vibe a bit more rocking and uptempo and the hooks are sharper.

You can’t really talk about this album without mentioning a certain band. Yes, there’s a very strong Toto influence evident on many of the songs. It does delight me that most of the ”Totoesque” songs seem to have drawn their influences from albums like ”Isolation” and ”Seventh One”, which are my favorite Toto albums.

The main man of the band is writer/producer/songwriter Alexander Kronbrink, who has penned a rather fine selection of AOR songs for this album. I could imagine this album making him a sought-after producer too, as it sounds like ”a million bucks”, as the old saying goes… It’s not completely Kronbrink’s show though, the two singers of the project pretty much steal the show. Johan Boding is the latest addition to the band and he has a perfect voice for this kind of material, very much like Joseph Williams in his prime. The female voice belongs to Marika Willstedt, and she is just as impressive.

The standout tracks for me are the hi-energy AOR track ”Brighter After Dark”, ”Love Clash” with its’ anthemic, slightly Starship-like chorus, the Big Ballad ”Hide And Seek” and ”Half Of My Heart” which could be described as ”Alien in Isolation” (get it?). The Work Of Art-like ”Amelia” is a good one too, as are most of the others… a few of the tracks are still a bit too westcoast-y for me, but overall, ”Next Stop” is a winner and a major leap forward for the band.

Posted by ROCKUNITED.COM at 4:27 PM