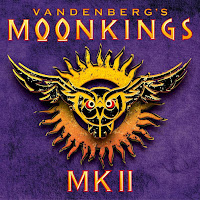 New Day and Hard Way have very "familiar" riffs and they even sound like the notorious well-known riffs from a certain hard rock band from down underÖ..Musically speaking the most interesting (best) songs are The Fire, featuring a ballad-like intro followed by a heavy, groovy Led Zeppelin-like melody and If You Can't Handle The Heat, a mid tempo rather heavy rocker. Both songs have great endings as The Fire ends with a spectacular "jam" between bass player Sem and drummer Mart, while the "master" himself ends the last song of the album with an astonishing guitar solo. Lyric wise most of the tracks are genuine rock and roll, no bullshit lyrics with the exception of the song What Doesn't Kill You, which deals with the contemporary madness that surrounds us  nowadays.

There are really no fillers on this album, although Ready For The Taking reminds me perhaps too much of Creedence Clearwater Revival and Walk Away is maybe a bit too "poppy", but there is always something that you can nag about, right? No, I can truly say that Ad Vandenberg did it again; MK2 is a great hyper melodic hard rock album that will certainly end up in my top 10 list of 2017. Play it extremely loud, please!!!!
Posted by ROCKUNITED.COM at 9:02 PM No comments: 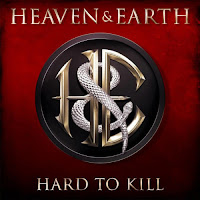 
I can't believe it's been four long years since I was rocking out to Heaven & Earth's 'Dig' album, where they basically delivered the sort of music we all wish Ritchie Blackmore could still churn out. Head honcho Stuart Smith has once again put together a roster of musicians who just kick ass in all the right ways, and thankfully he's also realized that as nothing is broke musically there's no need for any fixing.

Opening track 'Hard To Kill' certainly sets the scene well, with blistering keyboards from Ty Baillie bringing to mind the great John Lord in his heyday, and vocalist Joe Retta managing to channel both Ian Gillan and Joe Lyn Turner at the same time. Seriously, this is one of the best single tracks of the year as it just blows your balls off. Smith himself continues to provide some excellent guitar without trying to overshadow the rest of the band, and his riffs seriously echo classic Purple and Rainbow in the best possible way, whilst the keyboards add Uriah Heep into the mix as well. Behind the kit at the back is the ever reliable Kenny Arnoff, a master of rhythm without unecessary flair, and it's obvious from the off that this is a band that play well together.

The tracks here range from fluid to stompy, from melody to blues, from paced to ballad, with the main common denominator being they all rock like crazy. Catchy refrains, foot tapping choruses and above all great playing, all held together by Retta's powerful vocals which perfectly compliment the band's style. Foot stompers like 'Anthem' and 'Monster' are designed to get fists pumping in the air, whilst 'L.A Blues' does what it says on the tin, followed by the awesome 'Hellfire', which belts along and throws harmonica into the mix for good measure. Elevn tracks simply fly by, and the temptation to listen to them is so great it puts the snake in Eden to shame.

'Hard To Kill' is definitely one of the most impressive releases this year, and Stuart Smith and co should be justifiably proud. It's definitely retro in sound and feel, but it's the sort of retro that never, ever feels old, just classic. If you like the more heavy, fun aspects of Deep Purple or Uriah Heep mixed with Rainbow's class and melody then this is must buy. Seriously - move heaven and earth if you have to, just get it.


Posted by ROCKUNITED.COM at 4:24 PM No comments:

INNUENDO: "The Road Not Taken" 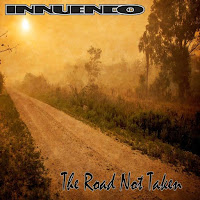 Innuendo have been around since 1994, and although this is their seventh album it's the first since 'Half Empty' in 2004. Comprising of multi instrumentalist Brett Richey and Vocalist Pat Laferty, Innuendo have received plenty of admiration for their laid back melodic rock efforts, and it's nice to see then again after a long period of rest and relaxation.

To be fair 'Rest & Relaxation' wouldn't have been a bad title for this album, as Innuendo rarely put their collective foot down, content to cruise along the old West Coast enjoying the scenery rather than trying to break the speed limit. Opener 'the Other Side Of Town (Jeusu)' is a very nice mid paced track, catchy and endowed with a sweet chorus that immediately gets in your head. It's followed by the keyboard led, very meandering ballad 'The Road Not Taken', which despite a nice guitar solo is rather a drag. 'Waiting For You' rescues the pace a bit, but again suffer s from not really going anywhere, ending up as a pleasant but unremarkable song. The pattern of these three songs is constant throughout, with some nice, upbeat songs mixing with the average and the rather dull. 'Digital Ocean (1974)' is a lovely, funky track, whilst 'Playing My Guitar' flirts with psychedelia quite nicely. Pat Laferty provides decent if unspectacular vocals throughout, with Richey coming in with plenty of cool guitar when the songs allow for it. The production could be better although it's certainly not a deal breaker.

'The Road Not Taken' is definitely an album of many parts. There's a nailed on West Coast vibe, with AOR and Prog both rearing their heads in certain songs. Personally, I found too many of the songs to be average and not creative or catchy enough to warrant going back to after this write up. Then again, the songs I did like I liked a lot. Innuendo may be for you if you want something that's not too exciting but is well made nonetheless, but if hard hitting AOR is your bag you may not find enough here to keep you amused.

Posted by ROCKUNITED.COM at 12:18 PM No comments: 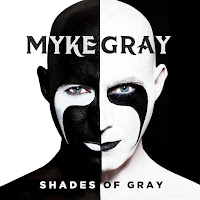 Always liked Myke Gray from his days in Jagged Edge and Skin but this is an instrumental album so there’s nowhere to hide - it’s walking a high wire with no safety net. This album is a drive through guitar city with the windows open, all Gray’s favourite guitar heroes hanging on every corner. The influences are clearly evident but the common thread throughout this release is melody, layered guitars, a varied array of guitar techniques and clever use of temp change.

The album’s opening song “Infinite Power” is so in your face it could shave your beard, it’s got more energy than the national grid.  “Maverick” is a really catchy tune I like, there’s also a darker side such as “Diablo” a killer opening riff that is right up Ozzy Osbourne’s street but before his wife Sharon sets the dogs on us there’s still time to drive down Nuno Boulevard and “Grab Life By The Balls” .This is something we were not expecting it seems very Nuno Bettencourt inspired and just shows how cool a guitar player and writer Gray is. The album finishes with a vocal track “Take Me Home” featuring Lorraine Crosby.  I don’t think it belongs on here but the Jules Holland show definitely.

There’s not one Malmsteen rip off song in sight, what a refreshing change for an instrumental disc. Gray has always been a true Brit, he’s done himself proud on this self financed and produced released. Love the album design, Myke Gray’s image and the whole concept. He’s approached this album with the same intensity and enthusiasm has one of his flying Vegan nutritional home cooked meals he serves up on social media and has served up a very tasty album indeed.

Look, don’t mess around just crank this sucker up and enjoy, Myke Gray said “I wanna leave a legacy”. He’s well on his way, excellent release and like the man said “I Love Guitars”!

"Shades Of Gray" available from www.mykegray.com 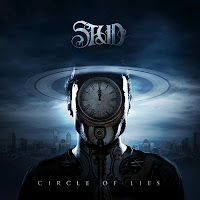 Rating: RRr
Label: Cranksonic
Review by Satu Reunanen
Finnish hard rock group Stud released their third album Circle of Lies this September. The band is still relatively unknown in Finland and elsewhere, although their history goes way back to the eighties when they toured a lot and even appeared on TV, back then performing in Finnish language. The band had a break and came back to the scene in 2011, now singing in English and released all of their albums after that. The line-up today is Ari Toivanen (vocals), Mika Kansikas (guitar, keyboards), Jyrki Partanen (bass) and Stenda Kukkonen (drums).
The third album offers similar songs and feelings as before to those familiar with Studs music. The album kicks off in a mighty way with Hey You, the guitar opening the song and a high scream to follow. It's one of the heaviest songs on the album with a mix to match. No fear though, the band still plays hard rock in a traditional fashion. The title track takes a faster turn with stylish guitar parts, which are present throughout the album. The band stays in
their comfort zone through the album though, they play it all safe which is fine, they get their point across. Toivanen has a recognizable, echoing vocal sound, which he can also use in a powerful manner and is backed up with other vocals.
The traditional eighties feel is very deep with Stud. With keyboards playing in the background quite unnoticed, Stud could as well be a part of the Peer Günt camp, another eighties Finnish band which plays with a garage sound and a more straightforward approach. A certain Günt style occasionally haunts the Stud album, especially the guitar beginning at Real Man, and makes it a somewhat raw listen. The style might be a calculated one and even if it's not, it will surely wake the interest of fans of this style. But with the unsufficient amount of keyboards the album can't offer much diversity and layers. Some of their songs would've worked better with/more keyboards in them. The album needs a few spins before the songs and the atmosphere sink in. Circle of Lies is for fans of traditional, simple hard rock, with roots heavily in the eighties and music played with a garage feel. 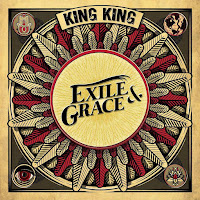 The 4th album of Scottish blues rockers King King is called Exile & Grace and musically speaking it is rather different, read rockier, than their other three albums; they "abandoned" the blues, but they stayed true to the essential King King sound. On this album, featuring 9 songs, you can hear influences from notorious bands like Bad Company, The Free, The Faces, The Rolling Stones and even Thunder. Just listen to the fabulous opener (She Don't) Gimme No Lovin', which features a lovely guitar solo and a very catchy chorus, and you might think that you are listening to Thunder's Backstreet Symphony album; but not really of course. Other musical highlights are Heed The Warning, Tear It All Up and I Don't Wanna Lie; all featuring catchy melodies, "mean" guitar solos and nice guitar hooks and riffs. In fact the entire album is a good mix of soulful vocals, excellent guitar playing, exquisite keyboards passages, a solid rhythm section and great song material. Exile & Grace has an underlying theme, as according to Alan Nimmo the main songs are about the state of the world. Exile & Grace also features a bonus cover, being Whitesnakeís Give Me All Your Love; again, although I loathe covers, an excellent track on a more than excellent album. Play it loud and I am looking forward to hear certain new songs live as some songs are destined to turn into a jam in a live setting!
Posted by ROCKUNITED.COM at 8:57 PM No comments: