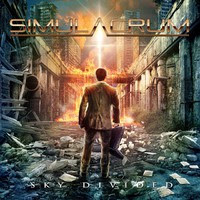 The second album of the Finnish prog metal band Simulacrum is again a must for lovers of music that blends speed metal with neo-prog and classic power metal with melodic rock. Sky Divided is a kind of concept album dealing with science fiction inspired by classic sf books/movies, like War Of The Worlds, Fahrenheit 451 and Mad Max.

Musical highlights on this album are the two longest tracks being The Abomination and A New Beginning. The latter clocks 14 minutes and is a perfect example of the complex music of this band: great musicianship all around with influences from notorious bands like Symphony X or Fear Factory. The Abomination is my favourite as it features a superb instrumental passage with excellent guitar and keyboardsolos. Timelapse is the instrumental opener and this one almost sounds like a movie sound track, mainly due to the great orchestration in that song. Broken, a very dark song, has a surprise in store as it actually features a mean saxophone solo, giving that track an almost jazzy feeling. Sky Divided features endless guitar hooks and riffs and here the drumming is very dominant and powerful.

In fact I would say that there is not a bad song to be found on Sky Divided and if you like fast melodic neo prog metal and bands like Symphony X, Fear Factory, Yes and/or TesseracT then this album will certainly please you. Play at maximum volume or listen to the album thorugh your headphones and you will be amazed. Highly recommended for fans of Scandinavian power metal! 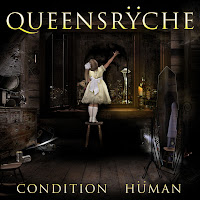 The consensus seems to be that this second Queensrÿche album with vocalist Todd La Torre is superior to the first one. I don’t know about that. I admit that in my review of the ”s/t” album, I was perhaps a bit too overjoyed about the band going back to their early style. It’s still a good album but I have to say that I haven’t listened to it that much after finishing my review. I feel that this album will suffer the same fate. It’s quite good and the band sounds like vintage Queensrÿche, but somehow I just don’t seem to get a grip of the songs.

I’ve listened to the tracks quite a few times, yet only a few of them have the kind of riffs, melodies and hooks that leave a lasting impression - like ”Arrow Of Time”, the title track and ”Guardian” with it’s familiar ”Revolution Calling” catchphrase (or is it ”evolution”?).

Still, despite its’ shortcomings the album is a true ’Rÿche album featuring a band that sounds convincing and enthusiastic. They are playing the kind of music that they want to, and that’s something special. Maybe a few additional spins will make me change my mind about the songs, but as of now, it’s three R’s… okay, let’s throw in some umlauts there! 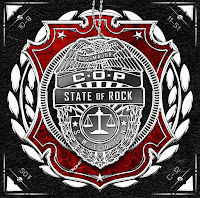 Christian (Sundell), Ola (Af Trampe) and Peter (Sundell). That’s their excuse for yet another bloody D.O.T band name… but let’s just concentrate on the positive things, like the band’s music for instance!

All three members of the band have a band called Grand Illusion in their past, and I think most Grand Illusion fans will enjoy these songs too. The ”C.O.P. Rock” might be a bit more straight-forward, but Peter Sundell’s distinctive vocals and the band’s love for big, melodic choruses are a reminder of the past. For those not familiar with Grand Illusion, I’d describe the band’s sound as a mixture of Zeno, Harlan Cage and 80’ies TNT with lots of keyboards, all iced with the Swedish melodic sensibility. Damn, do they spend hours studying ABBA in the Swedish elementary schools or what?

The standout tracks on ”State Of Rock” include the super-catchy ”In The Night”, ”Loner” and ”I Want The World To Know” which reminds me a lot of Harlan Cage/Fortune.    Even though the album is very keyboard-oriented, it never sounds too wimpy, underneath the layers of keys there’s a solid guitar foundation by Ola Af Trampe which gives these songs a bit of an edge. Same goes for the songwriting, the songs have a darker edge than most standard AOR songs. Don’t know about you but I find that very appealing.

What’s more? Well, call me the ”songtitle police”, but I find it odd that a band can still come up with songs like ”Without You”, ”In My Dreams” and ”Broken Heart” in 2015. Just by looking at the track listing, you’d be forgiven for thinking that C.0.P.is a cover band…

Posted by ROCKUNITED.COM at 9:55 PM No comments: 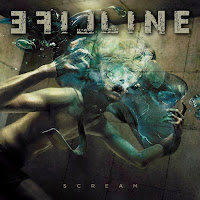 I won’t try to pretend that I can keep up with the current UK melodic rock scene. There’s a few guys who are keeping themselves busy with multiple projects and bands, and Lifeline features at least two of these workaholics - Lee Small and Nigel Bailey.

Lifeline is the latest (or one of the latest) projects with two vocalists sharing the lead vocal duties. Lee Small has sung with Shy, Phenomena, Snowfall, Skyscraper while you might know Nigel Bailey from Three Lions, his own band Bailey or Stan Bush’s Rockingham live band. Both are great singers, Small has a bit of a Glenn Hughes-like voice while Bailey has a more of a raspy one with some similarities to Joe Lynn Turner’s voice. They sound good on ”Scream”, separately and together.

The band’s music has its’ foundations in the classic hard rock sounds of the seventies and early eighties. Many of the songs have a strong Turner-era Rainbow-vibe, while others remind me of Thin Lizzy (”Far From Home”) or early Whitesnake (”Destination Freedom”). My personal favorites are the strong opener ”Fear No More”, the AOR track ”Feels Like Love” and ”Danger In The Sky”.

”Scream” is a solid album with powerful production and great performances, and it should appeal to the fans of the aforementioned bands and era. I liked it, but in the end there were a few too many songs that didn’t leave a lasting impression. Still, the fourth ”R” was close…

Posted by ROCKUNITED.COM at 9:01 AM No comments: 
Say what you like about the French (seriously - they don’t care what YOU think), they’re not a bunch that you expect a great deal from when it comes to rock music. Yeah, yeah, there’s been a few, but it’s not exactly Sweden, if you know what I mean.

Anyway, Pleasure Addiction are a recent addition to the roster of French Bands You’ve Never Heard Of, and they’re following up their debut ‘INdependence’ with this offering, which according to the title should be more, well, ballsy.

As you may gather from the none too subtle cover and band name, Pleasure Addiction are camped firmly with the sort of bands who use enough hairspray to gas ISIS and enough lipstick to make all the corpses pretty. When done correctly, a bit of wham bam thank you glam is an enjoyable thing, and Pleasure Addiction certainly seem to understand this, as ‘Extra Balls’ is chock full of upbeat riff laden bouncy tracks, the sort of thing Poison used to do once upon a time. It helps that they kick it all off with the single ‘Don’t Let Me Down’, which is an outstanding example of the genre. On the downside is ‘Heaven & Hell’ which suffers greatly from being a slower song, highlighting the averageness of vocalist Butcho (wouldn’t be a glam band without silly names, right?), something the faster tracks manage to cover up with their wall of sound. In fairness to him, though, Butcho’s voice does sound right for the sort of music that’s being played, he’s just not a balladeer.

I hear a lot of bad Glam Rock in my job, and I’m happy to report that Pleasure Addiction don’t fall into the swampy pit of shite that swallows up so many others. They have a good energy to their sound, and have tapped into that mid to late Eighties vibe with a rare passion. There’s nothing deep or meaningful here, but there doesn’t always have to be. Check out ‘Don’t Le Me Down’ on YouTube, and if that floats your boat you could do worse than grabbing some extra balls as well.
Posted by ROCKUNITED.COM at 3:46 PM No comments: