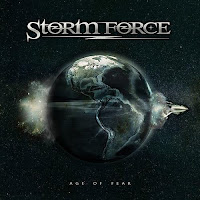 Remember Brighton Rock? The Canadian band that had their heyday in the late eighties, but have been sporadically active every now and then? The band's guitarist Greg Frasier has put together a new band called STORMFORCE, and if you like Brighton Rock there's a very good chance you'll like this album as well. Other members of the band are vocalist Patrick Gagliardi, drummer Brian Hamilton and bassist Mike Berardelli.

If I didn't know better, I'd be easily fooled to think that Stormforce is a young band with a deep admiration for all things eighties, such is the level of energy here. They've got razorsharp riffs and hooks, not to mention a few vintage sounding power ballads. Vocalist Patrick Gagliardi is a real find, not a soundalike to Brighton Rock's Gerry McGhee but he does have that similar "smooth & rough" quality to his voice. He'd be able to do justice to BR material should the band choose to play those songs live.

My favourites include the first single and opener "Because Of You", which is a fine, breezy melodic rocker, the metallic yet melodic "Age Of Fear", "Ringside" and "Breathe", which features Serena Pryne on guest vocals . The three ballads on the album are rather good too, with "Ember Rain" standing out. There are touches of Skid Row's "I Remember You" in the chorus, but not too much, just enough to make you... remember that song.

Halfway down the tracklist you'll find a few rather straightforward hard rockers, riff-driven steamrollers "Ride Like Hell", "Dirty Vegas" and "Marshall Law". They are all right, but not catchy enough to be among my top picks. No doubt they'll work better when the band blasts them out on a gig. 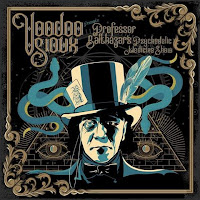 Voodoo who? Haha, what a hoot wordplay is, eh rockin' readers? Seriously, though, not having heard of this Midlands based UK band is not a surprise, but not getting to know them very soon may be a mistake you'll wish you never made. First heard in the 90s, they gained a good reputation through hard work, winning a national radio competition (on The Friday Rock Show) and the release of a superb debut, 'S.K.R.A.P.E'. Then it all just didn't work and they vanished into the ether. In 1997.

It's now 2020, and the Sioux are back with their second album since reforming ten years ago. The last one, 'Grotesque Familiares' (2013), was a real kick in the nuts for fans (in a good way, natch), and so excitement has been building for this one. Worth the wait? Is Gene Simmons a greedy bastard? (That's a yes, by the way).

Opener 'Running On Empty' really plays to the bands basic strengths, with a powerful guitar, catchy melody and replayability to the moon and back. 'Pandora's Box' follows with a crunchier sound and a no less catchy chorus, and brings in a favourite trick of letting vocalist Nicky Flaherty have a littls solo moment in the sun before being joined again by guitars. '(You Make Me Wanna be A) Better Man' brings a lighter touch and a chorus that won't quit, after which things are slowed down for 'Into The Garden', one of a few emotional acoustic tracks spotted amongst thirteen songs that lasts comfortably over an hour.

Voodoo Sioux prove over and over again that the fact they never became superstars is a criminal oversight. Flaherty has a top notch voice that seems like someone got Joe Elliot and Noel Gallagher fused together in a cloning machine, whilst the music has it's roots in straightforward rock but it's flowers reaching out for funk, pop and psychedelia, yet never losing those essential roots. There's nothing here I haven't fallen in love with, from the aggression and melody of 'Alias The Jester' to the simple but moving acoustic 'Dreamcatcher', all capped off with a beautiful piano version of 'Can't Stand To See You Cry' from the debut. Perfect.

If the name rings a little bell in your head, this is that band you liked years ago but forgot. If you're a fan, then this album will not disappoint in any way. If you're oblivious, then you need to buy this, enjoy it, and track down the other two, because trust me that's exactly what you'll want to do whilst you scour the listings to see if they're playing near you. If this isn't in my top five at the end of the year I'll buy a hat, because I'll have to eat it. Time to take your medicine...

BAND FACEBOOK
Posted by Reviews Ed at 9:51 AM No comments: 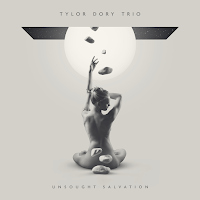 The Tylor Dory Trio is a prog metal trio hailing from Edmonton, Canada and so far this band has released an EP called: “Carried Away” in 2015. Now four years later the band releases their first full length album with the obscure title : Unsought Salvation. Maybe you have heard the 1st single East Of Eden from that album already and if you liked that track then you can purchase this album without further ado. So, if you as a listener are into Devin Townsend, Opeth, Dream Theater and Porcupine Tree then Unsought Salvation is a gem for you, at least if you are not bothered by a bit of “grunting’ now and then….Unsought Salvation kicks off with a song called The Righteous And The Rest and that one is filled with killer riffs and really brings out the Devin Townsend feeling in me. Glass Menagerie is another highlight with Floyd characteristics and marvellous guitar passages. But the best is yet to come as the album draws to an end and you can experience the epic Cenotaph, which clocks over 13 minutes. A prog metal rollercoaster musical ride played almost perfectly and second to none! Play this at maximum volume and you will be blown away!! The Tylor Dory Trio has some great and excellent musical potential, so be sure to check them out! 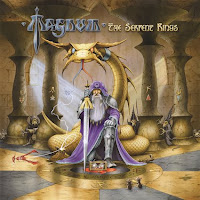 Showing no signs of slowing down, and looking like rocking out until Clarkin and Catley crumble into dust (nowt wrong with that), Bristish rock legends Magnum return fresh for the new year with their eleventy fifth (or something) studio album, the rejigged band now containing bass maestro Dennis Ward, who replaces the lovely Al Barrow.

The most important thing here is that what we have is a Magnum album through and through, and I'll happily allay and fears by saying that “The Serpent Rings” does not disappoint in this regard. Tony Clarkin still writes all the songs and he still has his eye right on the ball, not trying to disturb the winning formula that he nailed on “Lost On The Road To Eternity”, an album that seemed to feature a revitalized Magnum, possibly due to new keyboard tinkler Rick Benton.

“The Serpent Rings” doesn't break any moulds, with typical titles like “House Of Kings”, “The Archway Of Tears” and “Crimson On The White Sand” showing typical grandiosity. It all comes down to how the sound, however, and the whole album is rather like a comfortable slipper if you're already a fan. “Where Are You Eden” is a storming, crunchy opener that will make a great set starter on the upcoming tour, whilst “You Can't Run Faster Than Bullets” is a slower, heavy track that works well. There's plenty of melody about, with “Madman Or Messiah” so Magnum-y you can almost see Bob Catley waving his arms as he sings it. “Not Forgiven”, the track that has been used to promote the album, is a good example of the sort of thing that you're getting here, whilst “The Archway Of Tears” has a chorus that won't quit.

There's no short tracks here, but no epics either, with the title track touching on seven minutes but never becoming a drag. The eleven tracks give us nearly an hour of music, which is refreshing on any day, and there's genuinely not a duffer in sight. If you're a fan who has everything else this is a no brainer, but I have to say if you're a lapsed Magnumite this and the last album are perfect stepping stones to rekindling your relationship with Tony, Bob and the lads. A wonderful mix of all you've ever loved about the band, “The Serpent Rings” is Magnum for Magnum fans, and aren't we all a bit of a fan? 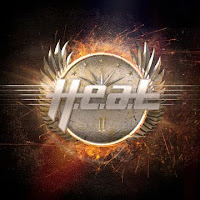 What better way to start the new year than with a review of one of the most anticipated 2020 releases? Especially when you can throw the full set of R’s to it and proclaim it as a very potential ”Album Of The Year”?

The previous H.E.A.T. album got very mixed reactions. The band flirted with pop sounds which irritated a lot of people. I didn’t mind the pop influences, I was more concerned about some of the harder-edged songs which were frankly a bit boring. I’m glad to say that with ”II” the band has found their way back to their roots, yet moved forward. This is the album that should please most H.E.A.T. fans - it rocks hard but it’s still very melodic, there’s hooks everywhere!

The bouncy, groovy ”Rock Your Body” is the album opener, and it’s bound to be the kind of song that works well live. It reminds me a little bit of ”Skin To Skin” by Heaven’s Edge, but it’s basically a very classic H.E.A.T. track that makes a statement - ”the H.E.A.T. is on again”.

”Dangerous Ground” rocks a bit like ”Kickstart My Heart” with a trademark H.E.A.T. chorus, catchy as hell. Another killer live track I’m sure. With ”Come Clean” the band takes a more keyboard-driven approach and sure enough, the song is an instant AOR classic.

”Victory” is something different, a highly melodic yet rather heavy rocker with a chorus that wouldn’t sound out of place on a Sabaton album! The bluesy ”We Are Gods” is my lest favourite track of the album, it doesn’t seem to take off despite its’ big chorus. I’ve warmed up to it a little over the last weeks, so it doesn’t jeopardise the album’s rating…

”Whoa Ohh Whoa Ohhh”.. yeah, they have one of ”those songs” here, and what a song it is. ”Adrenaline” is another AOR gem with an irresistible chorus. You’re probably already familiar with ”One By One”, the album’s first single. It’s a great song and if you like it, you’ll most probably enjoy the rest of the album.

”Nothing To Say” is The Ballad of the album, and it’s one of the standouts here. A heartfelt, great vocal from Erik Grönwall. Somehow this song reminds me a bit of Roxette’s finest moments. its’ melodic bliss is followed by another slice from the same cake, ”Heaven Must Have Won An Angel”. It’s simply a stunning melodic rocker. ”Under The Gun” doesn’t win any prizes for an original song title, and to be honest it’s one of the less memorable songs of the album, but still pretty good. It’s a fairly straight-forward hard rock song with a shout-along chorus. Could be a winner live, I don’t know.

Last but not least, there’s the second single, ”Rise”. It’s a stomping melodic monster with a bit of a Gotthard meets Pretty Maids vibe. The power metal choir from song ”Victory” returns to the scene of the crime…

I hope this is the big ”breakthrough” album for H.E.A.T., it definitely should please their existing fan base and basically any melodic hard rock fan. With the harder-edged tracks they shouldn’t have any trouble to find their way to the metal playlists either.