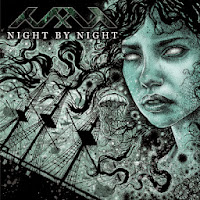 Night By Night is just what the melodic rock scene needs. A young, hungry band that doesn’t sound like they’re merely recycling old Journey or Bon Jovi songs, yet they don’t sound like they’re trying hard to be ”current”. They just happen to have great melodies, sharp guitar riffs and stunning harmonies. Romesh Dodangoda, who’s previously worked with Bullet For My Valentine, has produced the album and given it a perfectly balanced sound between "then and now". These songs song contemporary, but they wouldn’t sound out of place next to 80’is hard rock classics like Def Leppard, Dokken or indeed the two aforementioned bands. Did I mention that the band looks like rock stars too? Well they do.

Some of the highlights of this fine album include ”Can’t Walk Away”, the AOR-friendly, balladic ”Everywhere Tonight” and ”A Thousand Lies”, which has a touch of Bullet For My Valentine in it. BFMV at their most melodic best, mind you. And it’s just a touch.

My favorite track at the moment takes a pet peeve of mine, strangles it and hands it back to me in a highly attractive package. I’m talking about ”holding on” - just when I was ready to say that the world does not need yet another melodic rock song called ”Hold On” or ”Holdin’ On”, Night By Night come up with a song called ”Holding Onto Holding On” and it’s friggin’ awesome! Hooks, melodies, interesting axemanship, great vocals… the song’s got all that and more. I still think that to release song called ”Hold On” in 2014 is at least a felony, but these guys turn it up to eleven and get away with it!

I’ve been wondering whether I should give this the full R’s, as it’s something I don’t do lightly, but what the heck! I think these guys have figured something out, and they might just be the band that will draw younger fans to the genre. Check them out, and TELL EVERYBODY!