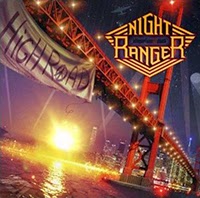 Vrooom!!! Who dat? The Knight Rider and Kitt? Nah. It's the Night Ranger on the High Road after midnight and I don't think they'll ever go home? And why should they? They still have a good thing going in 2014. The guitar riffs are plenty and the hooks are as sharp as in their heydays. It's just a slightly different sound than your ordinary Sister Christian. If you had to put a label on this great album, I guess the nearest you'd get is a bit less of the schlock and more of the rock in the vein of Damn Yankees and Tom Petty & The Torpedoes.

It's catchy, fun, guitar oriented rock with classy compositions by the three original members: Jack Blades, Brad Gillis, Kelly Keagy. They all know what they're doing. To date, Night Ranger has sold 17 million units worldwide and boasts several platinum and gold-certified albums. The approach they use in the studio may suggests a modern production and influence, but in reality it's retro rock with the technology of today. Most of the album, even though it sticks to your basic four chord classic rock formula, sounds fresh and energetic. A couple of oddities, but really just the great album effort in the fun uptempo mood.

In fact. When they slow it down and transform their rawk into more personal messages and emotion on "Only For You Only" or "Brothers", they're still just as professional and exciting. By the way, that "Brothers" tune is clearly the sound of Macca (ex. Beatles' Paul McCartney) and The Wings ála 1974. They even throw in the old "hey now" and it's the proper sing-a-long around the bonfire. Final verdict: Crank it up throughout the summer as this is your feel-good soundtrack of melodic rock.
www.nightranger.com
www.facebook.com/nightranger
Posted by ROCKUNITED.COM at 6:51 PM