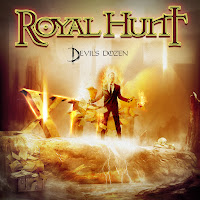 Royal Hunt have been on a winning streak since DC Cooper re-joined the band. After first couple of spins it seemed that ”XIII - Devil’s Dozen” would mark the end of it, but now that I’ve played this more, I’ll have to say that they’re still winning.

This third album since the reunion might not be quite as good as the previous two, but there’s not a lot to complain about either. Okay, there aren’t any super-catchy ”hits” here, but the quality of the songwriting still remains on a high level. Lots of melodies, lots of drama and lots of orchestration. I have a feeling that this album will take a few more spins for me to truly appreciate it.

The album sound BIG, the orchestration is impressive as are the choirs. DC Cooper is still on fire, he’s truly one of the most versatile vocalists out there. At times his vocal acrobatics border on being too quirky, almost in Serj Tankian fashion!

Favourite songs of mine include ”May You Never (Walk Alone)”, the gigantic ballad ”Until The Day” and ”Way Too Late”. I have to mention ”How Do You Know” too - a Royal Hunt song that’s only 3 minutes and 16 seconds long? It’s a rather fun, simple and bouncy number anyway… 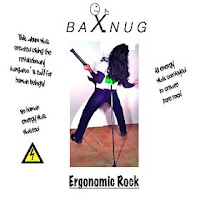 No. No. No. I have just spent several valuable minutes trying to listen to ”Ergonomic Rock” by Baxnug. I won’t waste too many minutes on this review.

I tell you this: according to the bio ”Baxnug is the musician that invented the kangaroo’s tail for human beings”. Go to the website for more info. ”The band founded a new musical genre, called ergonomic rock, where all songs were composed leaning on the tail, saving all the energy to create the purest rock worldwide”. I see.

”Ergonomic rock has the following characteristics…To give well-being to those that listen to it”… well, I don’t feel nearly as good as I did before listening to this album. It’s a chaotic collection of mostly whispered vocals, some grunts, recycled metal riffs and disturbing drumming.

To make my life more ergonomic, I will now delete these files from my computer. 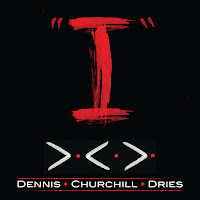 Dennis Churchill Dries was the vocalist in White Sister and Tattoo Rodeo, two bands that still have a strong cult following. White Sister played pomp-AOR while Tattoo Rodeo was basically the same band but with a more bluesy hard rock sound.

Dennis hasn’t been active in the music business for a while, apart from two Firefest appearances with White Sister. A couple of years ago we heard that he was forming a new band with Paul Sabu, ”Lost Angeles” I think it was called. He withdrew from it later, but the collaboration with Sabu has continued and Sabu is very involved in this album.

The glory days of Mr. Churchill Dries may have been three decades ago, but his voice is still in incredible shape. Fans of his vocals won’t be disappointed in his performance. Musically this album is somewhere between his former bands. It doesn’t have the bluesy/southern vibe as much as the Tattoo Rodeo albums but it isn’t as pompous, polished or catchy as White Sister either.

There’s a saying that someone could ”sing the phonebook and make it sound good”. I’ve never really understood that - for me it’s always the song that comes first. Yes, a great vocalist can elevate a song to the next level but even my favorite singers have songs that I don’t care for. Now I’m not saying that the songs on ”I” are bad, they’re all rather likable and DCD’s vocals definitely help. But to be perfectly honest, none of them really stand out. Closest things to ”greatness” are some of the ballads, which really showcase DCD’s fine vocals and heartfelt lyrics - take ”So Good To See You” and ”Pictures” for example. Close, but not close enough. 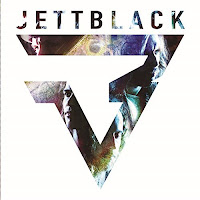 I liked the previous Jettblack album quite a lot, but ”Disguises” leaves a lot to be desired. It sounds like Jettblack has left the party and gotten upset about something - or everything. The tongue-in-cheek attitude of ”Raining Rock” is gone -  ”Enemy”, ”Slaves”, ”Kick In The Teeth”, ”Broken Bones” - yeah I got it, these are not party metal anthems. Unfortunately, along with the more light-hearted subjects the band has also lost its melodies.

The band’s ”Tesla meets Metallica” sound on this album could work if the songs were better, but these songs are frankly a bit boring. A shame. 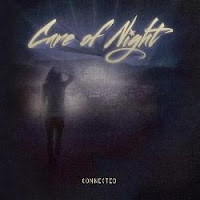 Here’s one that almost got away… released early this year, ”Connected” found its’ way to the ”to be reviewed” folder but for some reason didn’t get the attention it deserved. Until now, that is.

Care Of Night are from Sweden, and 3 of the 5 the band members used to play much heavier music in Seven Tears. When the Tears stopped falling back in 2009, Kristofer von Wachenfeldt (keyboards), Jonathan Carlemar (guitars) and Fredrik Lager (bass) wanted to play something smoother and more melodic, thus Care Of Night was born.

A demo produced by the Wigelius brothers (from the band Wigelius) got them a lot of attention in 2013, and led to them being signed to AOR Heaven. With a line-up completed by vocalist Calle Schönberg and drummer Linus Svensson, the band hooked up with the Wigelius bros. again, and started working on this album in 2014.

Care Of Night represent the smoother side of contemporary Swedish AOR, and their closest ”relative” is probably Work Of Art. Add a touch of Alien and Bad Habit to the mix and you’ve got a pretty good idea of their sound. Very polished, lots of immaculate backing vocals and swirling keyboards topped with Schönberg’s superb vocals.

It has taken me quite a few spins to really get into this album. The opening track ”Cassandra” was an instant hit, but the others sounded merely ”nice” at first. I was beginning to wonder whether they were actually too nice and polished, but in the end I couldn’t really resist the likes of ”Heart Belongs”, ”Contact” and ”Give Me Strength”. The two slower tracks were the ones that couldn’t really work their magic through my defenses - ”Dividing Lines” tried hard with its Chicago-like smoothness while the first 4 minutes of ”Say You Will” went for a ”More Than Words”-type of an approach, followed by 3 minutes of full-blown mid-tempo AOR assault. Too bad the song itself didn’t have an interesting enough hook. 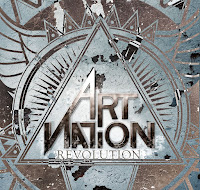 A couple of years ago a new Swedish AOR band Diamond Dawn released their rather good debut album ”Overdrive”. The band could have been called Diamond Dusk just as well, as their story ended later that year. Two new bands were born out of this ”separation”, and Art Nation is the one that features the former Diamond Dawn lead vocalist Alexander Strandell. The other band is called Streamline and they are also working on new material.

If you liked Diamond Dawn, you’ll probably like Art Nation too. There hasn’t been a drastic change in the music style even though some of the songwriters may have changed. Art Nation still play melodic, hook-driven rock with big keys, guitars and vocals and they do it well. ”Revolution” might not actually offer anything revolutionary to the melodic rock genre, but I think it’s better than ”Overdrive” and most probably one of the best Scandi-AOR albums you’ll hear this year. Yes, at times the band does sound a lot like H.E.A.T., but I could think of much worse musical crimes they could have committed.

The positively enormous opener ”Need You To Understand” sets the pace for the rest of the album. Guitarists Christoffer Borg and Johan Gustavsson throw in some wicked shredding and Strandell adds some spectacular vocal acrobatics to the song, which itself boasts one of the biggest choruses I’ve heard lately. Other highlights include ”3000 Beats”, ”Down Wait For Salvation”, ”Here I Am”, ”All In”… plenty of good stuff. Okay, the bluesy ”Wage War Against The World” sounds like it could’ve been taken from the latest couple of Europe albums and doesn’t really appeal to me, and I haven’t warmed up to the ballad ”Look To The Sky” or the Hammond-driven rocker ”I Want Out”, but the remaining tracks are all top-notch. Except for the intro of ”Start A Fire”, which sounds like a computer alert or an ancient phone ringtone!

THE DARKER MY HORIZON: ”Acquiesce” 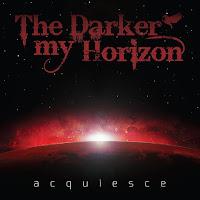 Paul Stead and Mark Stephenson were the core of SACRED HEART, who put out a few of self-financed albums few years ago. The band’s sound was very much in the Firehouse/Warrant vein, although without the polished major label production. Eventually the band called it quits, but now Paul and Mark are giving it another go with The Darker My Horizon.

With TDMH, the guys have updated the style and the sound to something a bit heavier and more contemporary. Paul Stead names Chad Kroeger of  Nickelback as one of his main influences and you can easily hear that, many of the songs have a strong Nickelback vibe. Thankfully Stead & Co have been more influenced by the melodic side of theirs instead of the dumb beer-driven ”dude rock”. And yeah, the ”old” influences are still lurking in the background, which isn’t a bad thing at all.

With 15 songs, ”Acquiesce” might be a bit too long an album for its own good, but it’s still the best bunch of songs the guys have come up with so far. Let’s put it this way - one can put together a solid 10 or 12 track ”four R” album out of the songs. Hence the rating.

Compared to the Sacred Heart material there’s more variety in these songs, apart from the Nickelback’ish songs there’s semi-acoustic melodic rock á la Firehouse (”Summer Time”), late eighties’ type of a power ballad (”I Can’t Save You”) and a delicate piano ballad ”In The Dark”. The weirdest song of the album is the closing track ”Rest In Peace” which fuses EDM elements with rock. It could’ve been a successful combination if the song itself had had a lot more meat around its bones, now it sounds more like an outro.

The production is pretty good, although some of the keyboard parts have been criminally buried under the crunch of the guitars.