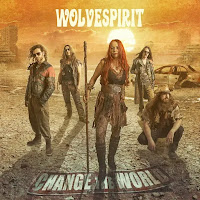 "Change The World" is Wolvespirit's 6th studio album and again it is an album with energetic classic rock songs, produced in the Southern Ground Studios in Nashville. In this legendary studio bands like The Foo Fighters, Eric Clapton, The Rival Sons and The Allman Brothers band recorded some of their albums, so this is almost holy ground indeed!

Wolvespirit is a German band, hailing from Wurzburg, with an American singer Debbie Craft and as I said before this is authentic classic rock in the veins of Uriah Heep, Deep Purple, and Iron Butterfly. Opening track "Don't You Know" is indeed a fine and great introduction to this new album, featuring a very heavy riff and a subtle Hammond organ melody. "Thunder And Lightning" is a bluesy song, while "Over The Rainbow" is rather calm and easy. "Strong Against The Wind" is a true rock anthem, "Time Is Running" a groovy track, while "Hells Bells Are Ringing" is truly up tempo and reminds me of ZZ Top. Highlights are "Strong Against The Wind", a rocking anthem and "Time Is Running", a very groovy song with an addictive chorus.

Posted by ROCKUNITED.COM at 2:48 PM No comments: 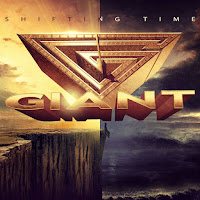 It's the third coming of GIANT! The legendary AOR band released two classics of the genre back in 1989 and 1992. The "second coming" took place in 2010 with Terry Brock on vocals. While some didn't consider a real Giant album because of the absence of original vocalist/guitars Dann Huff, it didn't meet as much resistance as this third attempt. Granted, Dann Huff was more involved in that one. Many of the songs were co-written by him, and he played two solos on the album.

Dann Huff gave his blessing to original members David Huff and Mike Brignardello to continue as Giant, but apart from one solo, he's not involved in creating "Shifting Time". Instead the album has been written by Frontiers' in-house team led by Alessandro Del Vecchio and band's current vocalist Kent Hilli.

Knowing the number of songs Del Vecchio's songwriting team has released during the last year or so, I was quite worried. Thankfully, these songs are mostly first class stuff. There are obvious nods to the Giant legacy here and there, but most songs stand as their own and not as replicas of old classics.

Kent Hilli is one of my favourite "new" vocalists, and he does a good job here. I like the overall sound and instrumentation as well, so while this may not be the original Giant, it's far from being something that ruins the legacy.

The first single and opening track "Let Our Love Win" didn't exactly raise my expectations, as it sounds like a half-hearted attempt to write a "typical Giant rocker". However, the next three songs "Never Die Young", "Don't Say A Word" and "My Breath Away" are very good AOR tracks, you can hear a Giant influence but they are not carbon copies of old songs. "Highway Of Love" and the ballad "It's Not Over" are less interesting, but "The Price Of Love" ranks as one of the highlights. The first bars of the verses are stolen from "It Takes Two", but the chorus is pure AOR magic which more than makes up for this little theft. Or "tribute", whatever you call it.

"Standing Tall" doesn't work for me at all, but do I like the ballad "Anna Lee" and "Don't Wanna Lose You". The closing number "I Walk Alone" is possibly the album's best song, a massive semi-ballad that can proudly stand alongside Giant classics such as "I'll See You In My Dreams" and "Save Me Tonight". Del Vecchio and Hilli have captured the essence of Giant, added some European flavour and the result is massive.

Posted by ROCKUNITED.COM at 12:08 PM No comments: