The fifth Uriah Heep studio album called The Magican's Birthday is my personal favourite  Heep studio album (the live 1973 album being my overall favourite Heep CD) and that is mainly due to three tracks, being Sunrise, Sweet Lorraine and the epic title track. Now, 45 years later this great album is re-mastered and I really have to say that listening to The Magican's Birthday again is still a pleasure, proving that Uriah Heep was and still is a great rock band.

Following their highly acclaimed Demons And Wizards album, The Magican's Birthday was commercially not so successful, although it reached number 1 in Finland! Musically it is a slightly more experimental and heavier album than its predecessor and therefore it is more to my liking than the notorious Demons album. The MB opens with one of Heep's live staples Sunrise, a beautiful rock ballad with top notch vocals of Byron, followed by the "simple" straight forward rocker Spider Woman. Sweet Lorraine, another live staple is also a nice rock and roll track with great keys from Hensley.

Absolute highlight of The MB, and also one of my favourite Heep tracks ever, is the epic title song, a very progressive and experimental track featuring excellent guitar work by mister Uriah Heep himself Mick Box. The chorus of the MB is very catchy and the guitar riff is extremely strong and recognisable. The Magican's Birthday is an excellent album, a must for Heep fans and this remastered version also offers a bonus CD with 15 alternative, never before released versions of Heep tracks. Notice the rare tracks Silver White Man, Crystal Ball, Happy Birthday and Gary's Song; the booklet is also worth mentioning and the cover, again designed by Roger Dean, is a beauty. So, again a great re-release by BMG, however if you are a Heep fan, you also need a healthy bank account to buy all these "new" Heep albums.
Posted by ROCKUNITED.COM at 8:20 AM No comments: 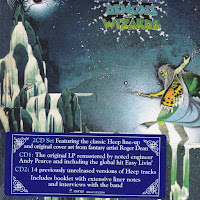 
Some people call Demons And Wizards Uriah Heep’s best album ever and it certainly was a very important album for the band itself. Heep’s fourth album featured the most talented and most accomplished line up of the band for the first time; so with Gary Thain on bass and Lee Kerslake on drums. Demons And Wizards was also the first Heep album for which the band wrote fantasy lyrics and it was the first Heep album with a cover designed by Roger Dean (Yes).

Demons And Wizards contains their biggest hit Easy Livin’, a song everyone has once heard before in his life. However the album features better tracks like Traveller In Time, The Wizard, Circle Of Hands and The Spell. Traveller In Time and Circle Of Hands became live staples for the band and one can say that the entire album is a classic of its genre.

Demons And Wizards was also a commercial success, making the UK top 20 and earning a gold record in the USA. This remastered edition features a bonus CD with 14 never before released alternative versions of Heep songs, of which All My Life, Home Again To You, Why, Proud Words and Green Eye are the most interesting. The extended booklet contains lots of extra information about the songs and also contains notes of Box and Hensley about Heep’s most notorious album. Demons And Wizards is an absolute essential album for any fan of this musical genre; a very influential album that cannot be overlooked or ignored.

Posted by ROCKUNITED.COM at 8:17 AM No comments:

URIAH HEEP: ”Look At Yourself” 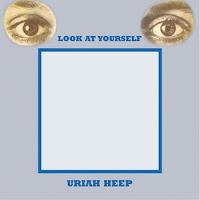 The third album of British Uriah Heep called Look At Yourself is a seventies rock masterpiece with a couple of classic Heep tracks. The album opens with the more than excellent title track which fuses heavy metal with progressive rock in a stunning way. Another classic Heep song is Tears In My Eyes, an up tempo rock track with southern styled slide guitar per excellence. But of course the highlight of the album is the longest and most well-known track called July Morning, as this song is the perfect representation of the classic Heep sound; Byron sings top notch and the organ riff and guitar solo are truly amazing. By the way Manfred Mann plays a bit of mini-moog on July MorningÖ.. Shadows Of Grief, also a long track, is very dark and What Should Be Done can almost be seen as a jazz/blues crossover track. Look At Yourself is a classic Heep album and a must for the fans.

This remastered edition also features a bonus CD with 11 tracks of previously unreleased material with alternative versions of July Morning, Look At Yourself and the other songs from the album. The songs Why Fourteen Minutes and What's Within My Heart (also on the remastered version of 1996) are "real" bonus tracks.

Look At Yourself remastered also features a very nice booklet with lots of information and ìinterviewsî with Box and Hensley, so: a must have for Heep fans. 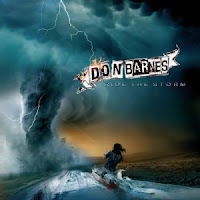 
There will be plenty of you out there, I am sure, who nrecognize the name Don Barnes as the vocalist in 38 Special for many, many years now. What you may not know (as I didn't) is that in 1989 he made a solo album, encouraged by thwe record company. the thing is, after making the thing the record company went tits up and the album got swallowed in buy outs and politics, never to be heard by the public until now.

Melodicrock Records are certainly giving fans what they want recently, with the second album from Jimmy Davis & Junction seeing the light of day as well as this little gem. It comes in two versions, one of which is a full on rock album, with the other a more smoothed out version. The one I've got is the rockier version, but if you buy it you get the other anyway. Personally, after hearing this version I have no interest in anything with any of the bite taken out. The best part is that this is the first time anyone has heard this mix outside the studio, as Barnes found the only copy when preparing for this release.

So let's get down to the music, which most certainly isn't the southern rock vibes of 38 Special. No sir, 'Ride The Storm' is a full on, energetic melodic rock album with all the neccessary hooks, melodies, keyboards and fun. 'Fun' is possibly the most apt word, as this is an album that is absolutely joyous in every way. This is the stuff that we loved from Stan Bush, the aforementioned Jimmy Davis, Bryan Adams (the good stuff) and maybe with a little Glen Burtnick in there as well. Barnes has a voice that contains a little bit of a rock croak when needed, but is smooth and tuneful everywhere else, and my Bod he certainly suits this style of music.

Unsurprisingly, 'Ride The Storm' is at it's best when it's in full on AOR mode, such as on third track, the irrepressable 'I Fall Back', the irresistably bouncy 'Maybe You'll Believe Me Now' or 'Everytime We Say Goodbye', the sort of track that Bryan Adams used to make before his balls fell off. Whilst there's obvious highlights for me, I have to say there's not a bad track on here. There's a couple of slower ones that don't hit the spot the way that the rest do, but they're still good tracks worth listening to.

It was a crime against rock music that this album was never released. When you hear it I know you'll agree, because it's one of those records that gets under your skin straight away. Great riffs combined with cool melody, with everything turned up to ten and a big fuck off grin that won't leave your face every time you play it. An instant classic, only 28 years too late.


Posted by ROCKUNITED.COM at 10:24 AM No comments: