The DAGGER: "The Dagger" 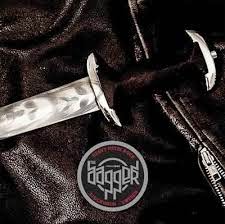 Ahhw... yet another Swedish act in the late 70's met early 80's British Hard Rock tradition and style. I need this like a knife in the back. But let's do the quick stab at their material which sort of remind us of the rusty old blade instead of the razor sharp cut-throat. They have clearly jumped on the Swedish bandwagon of transforming Purple and NWOBHM into viking rock and twin guitar harmonies of sub-standard quality. Don't get me wrong. It's hardly the crap album or the tragic waste of space. It's just not very original and there's plenty of U.K. acts doing similar efforts only with better result.

But seriously... what's wrong with their native home and roots if all the bands have to resort to British clichés and same old era 'ala 1978 (that's actually one of their songs by the way: '1978'). They should at least receive praise for not covering the same old Purple or Priest tune. Lo and behold. They have actually managed to track down the semi-obscure Birmingham act, The Quartz, and their "Mainline Riders". Kudos for digging up the mad Brummies. Quartz followed in the footsteps of this rather famous Birmingham act (read: Black Sabbath) and they are perhaps not too original in the first place?

"Skygazer" and "Electric Down" are two excellent examples of their retro rock though. It's all very seventies and major sideburns and roaring Hammond/guitars are key ingredients. They rely on simple tricks and mixing seventies and eighties U.K. hard rock is seldom the answer to finding their own style and sound. Nice twin guitar harmonies and melodies. A bit too nice if you ask me.
Posted by ROCKUNITED.COM at 9:47 PM