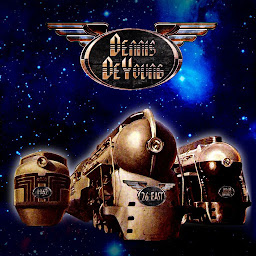 It's interesting that I'm covering this, as I'm not exatly a Styx fan of old. Sure, I'm partial to a bit of "Paradise Theatre" and can almost hit the notes to "Babe"on karaoke, but I've never followed them, only getting interested when Larry Gowan joined, something that resulted in 2017s superb "The Mission". DeYoung himself hasn't released a solo album for over a dcade, and I was apprehensive, more worried about being bored than entertained.

As you can tell by the plethora of Rs above, boredom was not a thing with "26 East Volume 1". Straight away DeYoung goes for the throat with "East Of Midnight" and "With All Due Respect", both of which are bouncy tracks with crunching riffs. "A Kingdom Ablaze" tones things down a little but still shoves in an aggressive refrain, with "You My Love" going into full on ballad territory and doing it just right, as it's a beautiful song that still has enough bite to grab listeners. "Run For The Roses" really sounds like something from a stage musical, and is a good, catchy track, with "Damn that Dream" having more of a pompy bounce that will delight Styx fans. Elsewhere there's a piano led duet with Julian Lennon, "To The Good Old Days" that could be the closing song of a musical and will certainly be the set closer if he ever tours. It's nice enough with emotional lyrics, a bit wet for my tastes but even so I don't skip it. The emotion stays in "The Promise Of This Land", which is a love letter to 'Murca, and how AWESOME it used to be (Wooooo!). It's a full on Styx type track and once it gets going it rattles along brilliantly, full of pomp and energy. Woo indeed.

Although only nine full tracks long (plus a one minute closer), "26 East Volume 1" still provides over 40 minutes of music, with every track hovering between four and six minutes and none outstaying their welcome. Very well crafted ballads, catchy balls out rockers and a healthy amount of pomp for the fans, it's wormed it's way into my brain over the last month and it's an album I keep coming back to for the sheer enjoyment of listening to it. So for me, as a casual Styx fan at best, it's a greart album, because I was never going to be disappointed that it's not "Paradise Theatre" part two. Personally, I'm looking forward to Volume 2, hopefully with a cover that doesn't look like it was made with 1972 TV technology...

Posted by Reviews Ed at 9:40 AM No comments:

Christian SHIELDS: "This Is Rock'N'Roll" 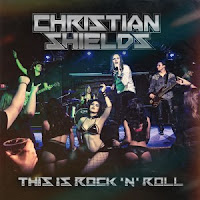 Mr. Shields kicks the door open with "Not This Time", a track modelled after Aldo Nova classic "Fantasy". This is indeed Rock'n Roll, not EDM, rap or anything else you're likely to hear on the radio these days. And for that I applaud this artist.

Apart from the Aldo Nova influence, We're talking about vintage 80ies sounds with a touch of the quirkiness of The Darkness thrown in. "Rock And Roll" and the bluesy "Here Comes The Man" have a Cinderella vibe, the semi-ballad "By The Strings" borrows a bit from Danger Danger, "Can't Get Enough" is straightforward rock, Accadacca meets KIX, the ballad "Without You" is a hybrid of Bon Jovi and Guns'n Roses...

The album's biggest downfall might just be what I wrote above: apart from Shields' rather unique vocals there isn't much here that I haven't heard before. I know, it's hard to re-invent the wheel and come up with something totally new, and I don't expect that. Shields could very well be on his way to finding his own style, but with this debut solo album, he's not there yet. Still, the is a decent good-time hard rock album, and I might add a couple of these songs to my summertime rock playlist.