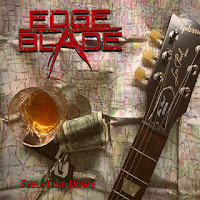 Better late than never. This album was released back in October last year, I downloaded the promo, played in a couple of times and then forgot about it. Now while re-organizing my hard drive, I found these songs again and decided to give them some attention.

Edge Of The Blade is a collaboration between Alan Kelly (ex-Shy, Seven Hard Years) and John Francis (UK AOR band After Hours). This is their second album, I haven't heard the debut but apparently it wasn't quite as "pure AOR" as this one.

Kelly and Francis have decided to cover three songs from a cult classic AOR album - Mark Free's "Long Way From Love". Whether it was a great idea is debatable. "State Of Love", "Never Be A Next Time" and "The Last Time" stand out as they're are superb songs, in my opinion clearly better than the band's own compositions. Then again, they still pale in comparison to the originals. That's not to say that the Edge Of The Blade originals are bad songs. They're pleasant and likeable, but I didn't find any future classics among them.

John Francis has an interesting voice, which definitely gives the band a bit of identity among dozens of AOR projects with a similar style. His very high-pitched raspy sound is very appealing but also somewhat piercing when he goes for the high notes. Like Benny Mardones mixed with Stephan Kaemmerer of Frontline, maybe...