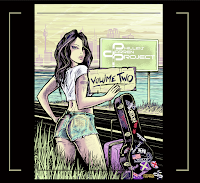 Darren Phillips has put together his second Project album, again with a massive list of guest artists. Darren himself is from Australia, while most of the guests are from Sweden, people like Philip Lindstrand, Herman Furin, Dennis Butabi Borg, Alex Strandell... the complete list would take half of this review!

This is definitely a versatile album, with song styles ranging from classic AOR sounds to punky hard rock and Hall & Oates-inspired R'n'b/soul-flavoured pop! Maybe a bit too versatile for my taste, since some of the more experimental tracks do not exactly work for me. But let's see what they've got, one by one.

"Stay" features Rob Wylde on vocals (I think), and it's kind of glammy rock track with a good chorus. A cool way to start the party. "The Last Goodbye" (so she didn't "Stay" then?) is a keyboard-driven AOR, an okay song but the strained vocal from the vocalist I can't recognize leaves a lot to be desired. "What's Love?" is another fairly catchy song, but somehow it sounds a bit rough around the edges.

"December Night" sounds like an eighties' Kiss track from Paul Stanley, which in my books is a good thing. I think it's Dennis Ward on vocals for this one. We'll get back to this Kiss thing later...

"You Make My Dreams" is a very bold departure from the rest of the album. It's a bouncy Hall & Oates styled track... It's not something I particulary enjoy, but nevertheless it's definitely bold and features a great vocal from Robbie LaBlanc.

"Drive" makes me think of some mid-eighties glam bands with a punky attitude - Easy Action or something like that. The production is suitably "lo-fi", probably on purpose.

"Hold On"? Seriously, this song title has been on the "OVER-USED-THINK-OF-SOMETHING-ELSE" list since 1991... okay, it's a decent song with a dramatic vocal from Alex Strandell I think. The promo sheet could have used a "cast of characters" list. Next up, "By My Side" is a semi-acoustic, semi-balladic track which sounds like some minor hit from the nineties. And if there wasn't enough "holding" on this album already, the next song is "Holding A Love", and again I'm thinking of the nineties, Gin Blossoms, The Rembrandts... quite nice.

Last but not least, we return firmly to the eighties' sounds with an actual Paul Stanley-penned track that was never officially released. "Best Man For You" dates to the "Crazy Nights"-era and you can hear some similarities to "Reason To Live".

So there, it's an interesting album and there's a lot of talent involved. You'll probably find something you like among these songs if you like melodic rock in general.

Posted by ROCKUNITED.COM at 8:40 PM