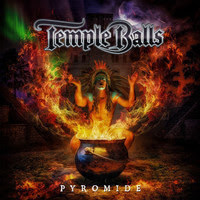 ”Pyromide” is the third Temple Balls album, but their first for an international label, Frontiers. The album is a definite step forward for the band in many ways, and I’m pretty sure they’ll make a lot of new friends with it.

The first two singles ”Thunder From The North” and ”TOTC” didn’t really convince me, even though they’re both decent, energetic songs. Somehow I thought they were just a little bit too straight-forward, bulldozer-like rockers. Therefore I wasn’t really expecting the album to hit me as hard it did.

With H.E.A.T. keyboard player Jona Tee producing and throwing in some of his songwriting expertise, it’s not a surprise that Temple Balls play in the same ballpark as Jona’s band. Make no mistake though, they are not a ”baby H.E.A.T.” even though Jona’s handprint can be heard, and if you enjoyed the last H.E.A.T. album, you’ll like ”Pyromide” as well. The songs are not alike, but both albums share a certain kind of hunger and determination. The hooks are sharpened to perfection and the band plays and sings as if their whole lives were at stake.

There’s eleven songs on the album, and not one that I could call ”a filler”. Even the aforementioned singles work well as a part of the album, even though they’re still not among my favourites. There’s a refreshing amount of variety in the songs, no two songs sound alike and several sub-genres of hard rock and metal are visited.

A few songs I want to mention: ”Fallen Youth”, ”You Better Run”, ”Something To Die For” and the ballad ”If Only I Could” are among my favourites, The bouncy ”Bad Bad Bad” is the song that could be the band’s crossover hit - with my vivid imagination I can see a huge festival crowd going up and down to its’ infectious groove, singing along and pointing fingers at each other… Hopefully this will be true someday!

Posted by ROCKUNITED.COM at 8:04 AM