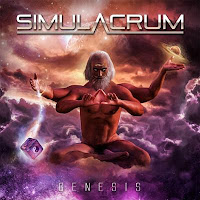 Genesis! Finally! The Prog-Rock comeback of the decade as we've been looking forward to Peter Gabriel and Phil Collins at... huh? My bad, 'Genesis', the title of the new album by Samlackacumrum? Simlackcrumum? Sammydidadrumstick? Blimey. Remember when you could go up to the counter and ask for 'Two Pints of Lager and a Packet Of Crisps Please? Splodgenessabounds! Now that's a proper band name. Splodgenessabounds! Keep that in mind next time you're trying to trick us with your Tom foolery.

The name really does say it all. There's no denying it, it's complex and hard hitting music on display and Progressive Metal is their favorite game. Simulacrum hail from the land of Hanoi Rocks and Children of Bodom's and we're well aware of Finland and the music. The difference this time around is instead of having one frontman, they decided to make the move to share the burden and have two lead vocalists. Erik Kraemer is the latest addition to the band as he's got a tone that varies from original frontman Niklas Broman's style. To be completely honest. I'm not enterily sure it's the right thing to do? This may cause inner conflicts and problems within the band?

Genesis is however a colossal album and the complexed compositions are steeped in the 'let's destory the cast and think outside the box' mould. You need to pay attention and keep trying to find their point of view and interest. The Bible closing four-part title suite goes through chambers and dungeons of role playing material about the obvious creation of man and his music. And I quote, "creation leaves no room for second guesses", end quote. There is a point to make though. The band seem to ignore any standard concept as the play the mix of modern metal prog with the complicity of seventies prog albums. They can't quite match the dinosaurs of the past neither the concept of fellow label mates, Vanden Plas. Final Verdict: Strangely alluring yet not quite satisfying.