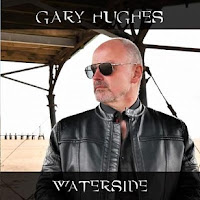 Whispering Jack is back! Some people always tend to complain about the voice of Gary Hughes? So what if he's not the screamy hi-pitched vocalist? He's well aware of his strenght and weakness and these vocals are actually good and full of emotion throughout the album. The overall song material? Yeah. I believe you could file this under mature(ed) music as he's not really going for the perfect TEN sound (pun intended).

The opening track of "All At Once It Feels Like I Believe" feels like Gary believes in all eighties pop/rock at once and especially Ultravox and Midge Ure? It's the rather laidback effort in all honestly and "Electra Glide" could have been the work of any former UK boy-band singer such as Robbie Williams or Ronan Keating. "Lay Down" the slightly more uptempo track with a bluesy arrangement a'la the the groovy seventies. "The Runaway Damned" feature the singing guitar work and a refrain that simply reeks of Roy Orbison and classic rock of a long gone era. Seriously. I kid you not. It's pretty darn good though. "Screaming In The Halflight" is a fine example of Hughes' ability to squeeze the best as well as last drop out of his rusty old pipes and it's the great piano semi-ballad.

This is Hughes' first new solo platter since his last effort "Veritas", released well over a decade ago. The new solo album "Waterside" marks his long-awaited return to melodic rock according to the press-release? I guess that depends on your very own definition of melodic rock? Musically, this is a mixed bag and although there's a couple of bouncy rockers at the end of the album (Save My Soul, Seduce Me), it's still the rather sophesticated effort and attempt at mid-paced rock/pop. "When Love Is Done" is however the utter cheese ballad (sigh). Assisting Gary on the record are his Ten bandmates Dann Rosingana (guitars) and Darrel Treece-Birch (drums), with David Rosingana appearing on bass and Karen Fell and Scott Hughes helping on background vocals. Final Verdict: Not too shabby.

Posted by Urban Wally Wallstrom (RockUnited.com) at 11:49 AM