KINGS OF LEON: "When You See Yourself" 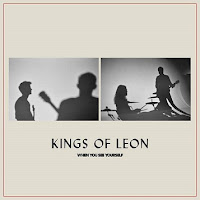 "When You See Yourself, Are You Far Away"? The Kings Of Leon are not completely sure about this thing called depth perception and the magic(al) wonders of the human eye. However, the perception of depth when viewing a real Rock scene with both eyes is qualitatively different. There is a vivid impression of ambitious geezers in America who'd just been releasing the new album as well as asking themselves and their fans about point of view regarding the opening track. It's their eight album and they are no doubt aiming to establish themselves in the national rock circuit after building a useful local reputation. Only kidding. They have sold over 20 million albums and nearly 40 million singles worldwide.

I find myself getting lost in "A Wave" which seem to control all the sea creatures and body surfers of the world. It's the smooth attempt at taking over the world one wave at the time, and the next following example which reads the "Golden Restless Age" may cement my original first thought regarding 'When You See Yourself'. This is the adult orientated rock album and the multi-platinum selling band has had the glorified Arena Rock meets guitar guru of the basement concept in heart and mind. Recorded at Nashville's famed Blackbird Studios and produced by Grammy Award-winning Markus Dravs, the Arena Rock influences have been taken a stage further, and the excellent "Stormy Weather" is one of the beneficiaries, as is the vaguely strange 'Fairytale'.

Kings Of Leon are not looking to spend their golden years at the retirement home (this is after all their 8th album) as they rock out their days churning the big sounds around for mature rock fans? This is a neat record offering a quality performance from start to finish enhanced by a excellent production. Final Verdict: Entertaining Arena Rock of 2021.