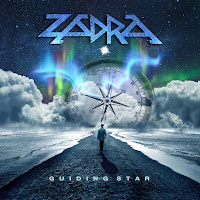 Guitarist/vocalist August Zadra has worked with Dennis De Young and Waiting For Monday, but now he has stepped into the limelight as the frontman of ZADRA, a project named after him. People involved include Jeff Scott Soto, Alessandro Del Vecchio and many more, even Dennis De Young plays a keyboard solo on one of the songs.

For what it's worth, this doesn't sound like a typical Frontiers project. This is a rather varied one, with some songs harking back to the seventies, when Kansas, Journey and Styx ruled the airwaves. "Take My Hand" for example - very much in the Kansas mould. The same goes for the short, oddball intro song "Come Together". Then again, "Nothing More To Say" skips the next decade and fall into the early nineties' AOR mood, when bands like Tall Stories were adding a bit of an alternative vibe to their sound.

My favourite tracks fall somewhere between the 80's sound and contemporary AOR: "Ship Of Fools", "Escape The Rain" and "I'll Meet You In Heaven". I guess they're some of the more traditional melodic rock songs, but I can't help it, I'm a sucker for big choruses and certain familiarity!

Talking about familiarity, "Come Back To Me" goes beyond that. It took me a minute to figure it out, but then it hit me: the song wants desperately to be Tommy Shaw's "Dangerous Game"! It isn't, but it's disturbingly close...