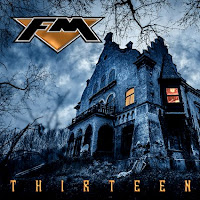 Not to be confused with Black Sabbath's identically titled album from 2013 (hey – it could happen), '13' is, unsurprisingly, UK melodic rock stalwarts FM's thirteenth album, as long as we all agree that 'Rockville' I & II were two albums, which they were. Playing on the traditionally spooky 'Friday The 13th' thing, the cover has a haunted house on it, though knowing FM it's full of kittens and unicorns, because they ain't no scary band!

In what seems to be a deliberate move these days, the album starts with a more chugging track rather than smooth AOR. You can file 'Shaking The Tree' with such openers as 'Black Magic' or 'Digging Up The Dirt' and, like those tracks, it's a serviceable opener that amused me when it used the hoary old line 'Seen it in the paper, heard it on the news'. Things pick up with 'Waiting On Love', the catchy, energetic and AOR-tastic first single, whilst 'Talk Is Cheap' is another heavier track with a good melody and cracking chorus. Last in the opening salvo is the best track on the album (for me, anyway), and that's 'Turn This Car Around'. Currently available as the second promo single, this is FM at their absolute melodic rock peak, with a really energetic pace, a great chorus and the chance for Steve Overland to demonstrate exactly why he's regarded as a master of the melodic singing arts.

As this is an FM album, we get a ballad, which comes in half way through the album. 'Long Road Home'; is a beautifully soulful track with a spoonful of blues heaped on top. Perhaps the catchiest chorus award has to go to 'Be Lucky', and it's a stronger reviewer than me who isn't humming 'If you can't be good, be lucky' for the rest of the day after hearing it just once. Saying that, it's followed by the punchy and bluesy 'Every Man Needs A Woman', which has a proper “whoah whoah” in the chorus that does it's best to kick the previous track out of your earworm cavity. FM are bastards for this, and 'Thirteen' has plenty of moments that come back to haunt you as you're trying to get off to sleep.

'Thirteen' is, for me, a real shot in the arm for FM after 2020s 'Synchronized', which was an enjoyable album but not a killer. This one is a blast from start to finish, the usual eleven tracks (should have been thirteen, really...) with no experimentation, no heroics in sight. A great FM album is made by the songs, and this one has an excess of quality tracks, flitting between chunkier, bluesy stuff and pure AOR without missing a beat. It's a given that the band don't miss a track musically, as they're one of the tightest units in the game, and whilst Steve Overland gets deserved praise for the vocals, never forget the efforts of Jupp, Goldsworthy, Davis and Kirkpatrick, now entering their fourteenth year as a full band.