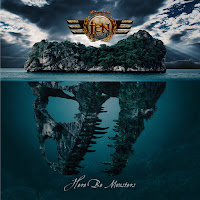 Apparently the first of two albums put together at the same time, "Here Be Monsters" is what Gary Hughes and co. did during the downtime of Covid years. The sequel will see the light of day later this year I guess, much like the double shot of first two TEN albums back in 1996.

I have to say that the last couple of Ten albums haven't really done much for me, but I'm glad to say that on this album Gary Hughes seems to have found his knack for great melodies again. It's not like he's changed the sound or style of the band dramatically, but somehow many of these songs represent the essence of Ten quite brilliantly - poetic, intelligent lyrics, melancholic melodies and catchy hooks, not to mention stellar musicianship and of course Gary's deep voice.

I like just about all the songs on the album, but from track 2 to track 7 the band showcase 5 songs all worthy of a placement on a "Best Of Ten" playlist, future Ten classics such as "Hurricane", "The Dream That Fell To Earth" and "Chapter And Psalm", to name a few.

One minor complaint though - a few of the songs start quite similary, with the chorus melody sung by Gary on top of sparse instrumentation. But that's about it, "Here Be Monsters" goes straight to the top 5 of Ten albums for sure!

Posted by ROCKUNITED.COM at 9:15 AM