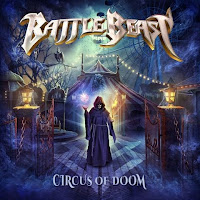 The third album since the rebirth of the band sees Battle Beast going for an ever more grandiose, bombastic sound. Orchestration and big choirs galore, and vocalist Noora Louhimo belting it out... this is massive music indeed.

The first half of the album contains most  of the bombastic material, while on the second half the band lighten the mood a little with the likes of "Russian Roulette" and "The Road To Avalon", both blessed with irrestistable pop-metal hooks. They're among my favourites, as is the similary catchy "Eye Of The Storm".   "Wings Of Light" and "Armageddon" are hook-laden tracks too, but somehow they remind me a lot of Anette-era Nightwish. Not that it's a bad thing.

The straight-forward power metal of the first Battle Beast albums is pretty much a thing of the past, but I for one don't miss it.