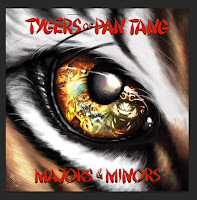 Tygers Of Pan Tang! Now there's a name from the past! They were a part of the New Wave Of British Heavy Metal movement (NWOBHM) and rather popular back in the early eighties with albums like "Wild Cat", "Spellbound" and "The Cage". the band broke up for the first time in 1983, only to be reformed in 1985 for a couple of albums. In 1987 they broke up permanently.

"Majors & Minors" is a compilation of TOPT material from 2004 onwards, with vocalist Jacopo Meille, who has been in the band longer than any other singer. According to the band's website, this is not a "Best Of" album, more like "Tygers Choice", as the tracks were chosen by the band.

Back in the eighties, some of the band's songs were very much in the AOR vein, but apparently their recent material celebrates their NWOBHM legacy. You won't find anything like "Paris By Air" or "Lonely At The Top" among these tracks. Instead, you'll get gritty riff-based songs with very few modern influences. Tracks "Never Give In" and "Let It Burn" sound like they could be archived recordings from 1981. I guess that's good news for many fans of the band.

My favourite tracks seem to be from the band's latest album "Ritual", which I must check out more closely soon. "White Lines", "Worlds Apart" and "Destiny" are more melodic and hook-driven than the other tracks, which suits me just fine.

While this compilation didn't exactly make me want to run and start a crazy Tygers shopping spree, it did remind me of the band, and I plan on revisiting some of their material, at least "Ritual" and some of the 80's classics. So, a mission accomplished.

Posted by ROCKUNITED.COM at 9:46 AM