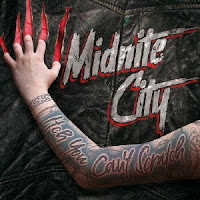 Hair Metal is back! Well, the whole term never existed back in the eighties, it’s something invented by later generations, but anyway, Midnite City proudly state that it’s their genre, and we’ll let them get away with that. Their sound definitely harkens back to the late eighties, the golden age of melodic hard rock - big hair, big choruses, big production.

If you like vintage Bon Jovi, Danger Danger, Def Leppard and Winger, ”Itch You Can’t Scratch” is a rather safe bet. Midnite City pay homage to all of the above, and connoisseurs might find links to more obscure bands as well. On the band's previous albums there were a couple of tunes where the influences were perhaps a bit too obvious, but on this one they're more discreet.

I wasn't totally convinced by the first two singles, the sleazy "Crawlin' In The Dirt" left me cold and while the Leppard/Winger-hybrid "Atomic" was better, I hoped that they have stronger songs on the album. As my rating might suggest, they do!

Most of the remaining songs are more AOR-friendly and melodic than the first two singles. The third single "They Only Come Out At Night" is by far the best of the three, a dark, melodic rocker that could've been on Alice Cooper's "Hey Stoopid" album. Check out the video, it's really a mini-horrormovie!

Other favourites of mine include the super-catchy "I Don't Need Another Heartache" ("Heart-heart-heartache"... listen to it once and try to get that out of your head! Ha! No chance!), "Fire Inside" and the Bon Joviesque mega-ballad "If It's Over".

So far the band has released three solid albums back to back, which is a good achievement by any standards. I think I'll have to give the other two a spin, now that I've got this itch...