BASTARDOGS: "No Pain No Gain" 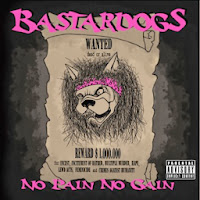 Sleaze rock/metal may have hit notoriety on the sunset strip in the 80’s with bands like L.A. Guns, Motley Crue and Faster Pussycat but the genre is alive and well in Italy of all places! That’s right Bastardogs began culminating in Genova Italy in 2010, going through a few line up changes and rearrangements during the formative years. Bastardogs have unleashed their debut recording, No Pain No Gain, in December 2013, serving up a heaping plateful of dirty sleaze rock. We now find Bastardogs consisting of the trio of original creators, Bonne (vocals/rhythm guitar), Andy (lead guitar) and Atta (drums) joined by Cosme (bass guitar). The band name leaves a little to be desired and has me a bit weary right off the get go but let’s give the music a listen before we judge.

The album artwork depicts a wanted poster for crimes of “incest, incitement of hatred, multiple murder, rape, lewd acts, feminicide and crimes against humanity”…..sounds absolutely charming! No Pain No Gain leads off with “N.U.S.U.” (I’m not sure what the acronym stands for as I can’t fully make it out after a couple of listens) paying homage to the genre and doing quite well at setting the sleazey tone for the record. Titles like “Sex Machine”, “Last Night”, “Drinkin’ My Brain Off” and “Bite You Down” all follow in the paths blazed in true sleaze fashion by the greats of the genre. "Bite You Down" serves as a good representation of the whole album and was released by the band in single format in August of 2013 and can be heard through the above you-tube link. Also available on you-tube from the Street Symphonies Record label is the longest cut of No Pain No Gain with "Zombietown" featuring the song lyrics in the comments section. “Snakehead”, “Edge of Youth” (concerning the passing of fellow rockers such as Dave Leopard of Crashdiet) and “The Pit” complete the album’s selection fulfilling a good fun time of upbeat party rock. Most of the tracks are under four minutes in length with two clocking in at less than three minutes, so the total run time is a bit on the light side.

While No Pain No Gain won’t win any awards it’s a good helping of party rock dripping with sleaze and it’ll be interesting to see what the Bastardogs have up their sleeve for the future.
Facebook

Posted by ROCKUNITED.COM at 8:46 PM