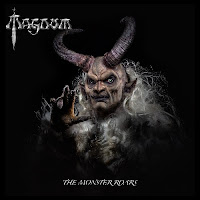 It boggles the mind that UK pomp rock stalwarts Magnum formed way back in 1972, making 2022 their official fiftieth anniversary. Though line up changes are pretty hard to avoid over such a length of time, Magnum have always benefited from the core duo of vocalist Bob Catley and guitarist/songwriter Tony Clarkin. Fans will agree that they've never unleashed a duff album on us, and so let's see what this little monster brings to the table.

The title track opens the album, and I have to say it's one of the weaker offerings here to my ears, with a structure that works well when it gets going, but the slow sections are a bit of a drag. A better opener would have been second track 'Remember', which also varies in tempo but has a structure to it that works so much better than the previous track. The subject matter of (I think lol) the good old days before Covid when we could go out and dance without any worries. Bob's voice sounds fantastic, and his range is utilized to great effect, with the music behind him flowing and pomptastic thanks in no small part to Rick Benton's great keyboard melodies. 'All You Believe In” slows things down a little, and it's a nice mid paced track that I don't think people will be going too mad over, a bit Magnum-by-numbers but still a good track. First single 'I Won't Let You Down' follows, and I know this did divide opinion when it was released I honestly really like it. It does have echoes of other recent tracks, but has a refrain that just wedges in your head and won't let go, a first class Magnum mid paced track in every way. 'The Present Not The Past' starts off pretty slow, though this isn't unusual for Magnum, but when it gets going (ironically with the words 'Wake me up') it turns into a real crowd pleaser indeed, with yet another attention grabbing chorus and pleasingly effective time changes. The first half closes with my personal favourite track (and second single) 'No Stepping Stones'. Unusually, it starts off with a crowd scene, then blasts into action with a brass type refrain that lets you know you're in for an upbeat ride. This has everything I love about Magnum, with a fantastic chorus and a melody that barrels along for the entire track save for a brief quiet section that precedes a great Clarkin solo. For me, this is up there with 'Just Like An Arrow' or 'Days Of No Trust' as a stone cold classic Magnum pop rock belter.

Side two, if you're a vinyl junkie, kicks off with 'That Freedom Word', another mixed pace song with a powerful chorus and atmospheric in between sections. The interestingly titled 'Your Blood Is Violence' follows, a slower track that is almost seven minutes long. It has a strong beat and some nice 'woah woah' bits, but only gets really interesting in the final two minutes as Clarkin gets in a cool solo and the pace ramps up dramatically. 'Walk The Silent Hours' is the albums first ballad, and it's a treat. Not a classic, but a solid, emotional song that allows Bob to shine and has a neat keyboard refrain that sticks around long after the song has ended. It's back to upbeat fun next, with 'The Day After The Night Before', and it's yet another pacey rocker with a chorus that just won't let go. Tony Clarkin writes this sort of thing so well, managing to make it sound both formulaic and totally original with one mystifying sweep of the pen. 'Come Holy Men' is a big, bombastic track that reminds me a little of 'Another Nice Mess' from the first Hard Rain album, and it's a great example of the band playing with power, about as rocktastic as Magnum tend to get and a welcome one, too. The album closes with 'Can't Buy Yourself A Heaven', a second ballad that has a nice, powerful chorus that once again shines thanks to Bob's vocals plus an upbeat section that allows Clarkin to show off a bit. A decent closer for sure.

'The Monster Roars' can stand proud against any of Magnum's 21st century albums, and is very in keeping with the last four of five releases in terms of content and style. There's certainly several tracks that threaten to be utter monsters live, and I hope that we get the chance to see that for ourselves. Fifty years of quality rock music? Piece of piss for these guys.