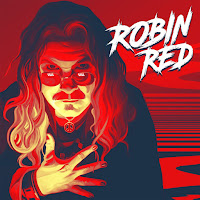 Degreed frontman Robin Eriksson has gone solo as "Robin Red", and with H.E.A.T. guitarist Dave Delone producing and co-writing, he has created an album that sounds timeless and throwback at the same time.

While listening to these tunes, I'm constantly reminded of early eighties' solo artists such as Rick Springfield, Billy Squier and Bryan Adams. The sound of the album is like a subtle 2021 update to the guitar-based melodic rock sound of those artists. I like the fact that these songs do not sound as "processed" as much of stuff released these days, there's a certain organic feel to these.

With Dave Delone co-writing, you might hear a bit of H.E.A.T. here and there, and a couple of songs have a bit of an Europe/Joey Tempest solo vibe. Okay, the chorus of "Heart Of Stone" is maybe more than just a bit similar to the Europe song by the same name...

My favourite song include "Everlyn", "Midnight Rain" and "Nitelife", but the whole album is pretty solid. A few of the harder-edged rockers sounded like fillers at first listen, but after a few spins I've grown to like them more.

Posted by ROCKUNITED.COM at 8:32 AM