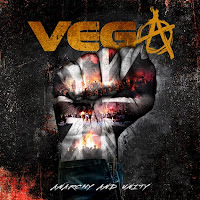 Some bands just connect with you on every level, and UK melodic rockers Vega have done that to me right from their first album over a decade ago. 2021 sees album number seven, their second during lockdown, and a chance to play some of the songs live this time, as they head out on the road in October.

The biggest problem I have with Vega is running out of superlatives when reviewing their albums. Vega, you see, rarely put a foot wrong. Their music is powerful melodic rock with solid guitars, layered keyboards and cool, short solos. They don't stray from their basic formula, but somehow manage to inject a new strain of creativity with each album that keeps complacence at bay. It's a good trick that serves contemporaries like FM and Cats In Space well, giving fans what they're used to but keeping it fresh at the same time.

The album starts off pretty much like any other Vega album, with the high energy tracks 'Beautiful Lie' and 'Sooner Or Later', both of which show the band at their melodic best. The mid paced 'At The End Of The Fade' caught me by surprise, though. Not because it's a slower track, but because the chorus just grabs you and doesn't let go, with vocalist Nick Workman's delivery a thing of sublime beauty. I've been listening to the album for a few weeks now, and bugger me if this doesn't seem to be my favourite, which is odd because usually it's a faster track.

'Anarchy & Unity' is chock full of catchy songs, more so than any other Vega album so far. 'Welcome To Whenever', 'Bring The Riot' and 'Glow', for example, will have you singing along pretty quickly, and they're not alone. There's a few plot twists, too, as the big six minute ballad 'Live For Me' switches gears half way through by upping the tempo considerably and finally giving Marcus Thurston the longest solo to date (forty five seconds), before going back to the impressive ballad it started off as, finishing up in a flurry of drums and keyboards. You've also got 'C'mon', which starts a bit like a jazz lounge standard and mutates into a bouncy tune with a chorus that reminds me of Michael Jackson's 'Leave Me Alone'.

The problem with reviews like this is they're written by an obvious fan, and so I've not tried to hide that. Even so, I am confident in my proclamation that 'Anarchy And Unity' is the best Vega album so far. Whilst it retains much of their trademark sound, it's not afraid to vary the tempo to great effect, with a few slower songs that really stand out amongst the usual bangers. If you still haven't boarded the Vega train, this is a great place to start, and anyone who likes powerful melodic rock should absolutely love this.