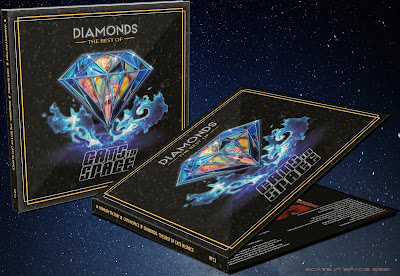 Cats? In space? Surely some mistake? No, there's no mistake here, as the UK's pop/rock/glam maestros welcome their latest vocalist with a sweet re-recording of some of their best songs.

Cats In Space delivered a real punch to the senses with their last album 'Atlantis', showing off new singer Damien Edwards to great acclaim and sticking firmly to harder tracks to cement their status as a first class hard rock act, regardless of their willingness to drift away from that path a few times. With no opportunities to tour due to the pandemic, the band decided it would be good to get into the studio and get Damien to re record the vocals on some of fans' favourite tracks. Good practice for him, and also another piece of product for their famously voracious fans.

Edwards is the third man to take the mic in the, and to be honest original vocalist Paul Manzi was never going to be an easy guy to follow up, as he was a great singer and performer who suited the band. Mark Pascall was in the band for a short while, but this release and 'Atlantis' shows that Damien is definitely in this for a while, with plans for his second original album with the band well under way.

So what we have here is ten older tracks re-recorded by Damien, plus three from the Atlantis album and a live recording of fan favourite 'The Greatest Story Ever Told'. If you're not very aware of the band, it goes without saying that this is a perfect intropduction, with the tracks going in date order, something which really shows off the fact that there's been no dip in quality since day one. You get the incredible title track from the 'Too Many Gods' album to kick things off, and it's obvious that Damien can not only handle this but also makes his own mark with a voice that is as good as Manzi's but has it's own inflections and tones. There's the forgotten dicso classic 'Thunder In The Night' and the short and vert sweet '2.59', plus the more grandiose 'Scarecrow', all being given a new lease of life, though I couldn't say they're necessarily better, just different. Side by side with the originals, it's simply one song done brilliantly two times.

Cats In Space are an incredibly easy band to fall in love with. There's melody in spades, hard rockers and clever lyrics, and an innate sense of what makes a good song. They dance around different rock genres with ease, never losing sight of what it is that makes them who they are. A must for old fans, and a perfect gift for anyone on the fence. Because cats sit on fences. Tch... I'll get me coat.