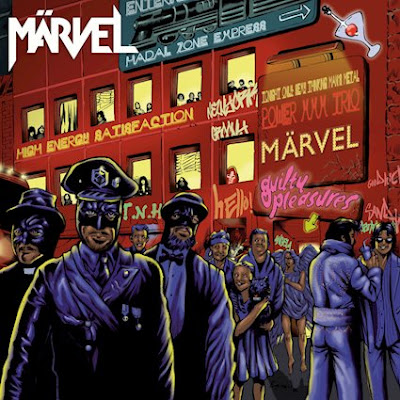 Sweden's self proclaimed barons of rock & roll, Marvel are a bit mad. They used to depict themselves as superheroes, enjoy using aliases like The King, The Burher and The Vicar, and since forming in 2002 have released several well received EPs and albums. Me, I'd never heard of them until this morning when 'Guilty Pleasures' dropped underwhelmingly into my life. I say underwhelmingly because it's a covers album by a band I've never heard of. As you can see by the score, things improved.

Interestingly, the guilty pleasures that Marvel have covered are quite eclectic, with just a couple that I'd even heard of, like Dire Straits' 'Sultans Of Swing', Elvis' 'Burning Love' and REO Speedwagon's 'Keep Pushin'. The fact that the rest were unknown made it fun to track down the originals (Thanks, youtube) and see how things compare. There's Lee Dresser's 1969 rockabilly song 'El Camino Real', or the brilliant 1979 pop song "10 O'Clock Postman' by Fellow Swedes Secret Service. Carrying on the Sweish connection is the little known track 'Can't Shake Loose', originally by Agnetha Faltskog of aBBA fame. Although written by Russ Ballard it's quite a tedious song that Marvel manage to make into a pile of fun that puts the original to shame.

This is a common theme throughout, as Marvel play fast but not too fast, turning each track into a high energy fun fest that owes a lot to the 70s and a small amount to Kiss (the lead track "All For Glory" is, for me, better that Kiss' own version). The King has a great high(ish) register voice and can play a mean guitar to boot. For a three piece they really do make a glorious noise that is akin to a hyperactive toddler who's also a musical prodigy. Every track has it's merits, but I kept coming back to that ten O'clock postman and closing track 'Rock & Roll Hootchie Koo', a fine tribute to the Johnny Winters/Rick Derringer classic.

'Guilty Pleasures' takes an idea that can go either way and boots it securely into touch thanks to an inspired track list and a band determined to make each track their own without sacrificing what made the original (except 'Can't Shake Loose', natch) great in it's own right. This album is lots offun and will keep you coming back for more, and that's a win in my book.