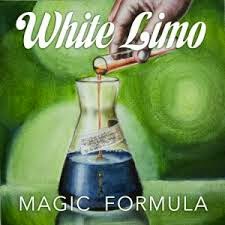 Sweden's White Limo are working hard on the 'Magic Formula' with their latest 5-track EP release. The press release speak of Soundgarden? But there's absolutely nothing on here that had me thinking about the Seattle group and grunge? Instead they actually end up standing with one leg in the arrangements and formula of arena rock while the other is firmly rooted in the Indie Punk/Rock scene.

It's some kind of Swedish hybrid rock project where Weezer meet Foo Fighters meet The Pixies meet Television and StretchArmstrong. Quirky, catchy, melodies and the constant reminder and message to the states: don't let your guard down or the Swedish Rock Mafia are going to run you over with melodies that you wise guys already recorded the ten, twenty, thirty + years ago?

Yeah. It's perhaps not the best of POPaganda and message really? They are however darn good at what they do and the songs are cheeky-fun in your alternative surf-styled genre which obviously include fuzzy guitar/bass tones and nice harmonies. Stillers (bass) and Svensson's (drums) steady rhythm section, Larsson's wicked guitar work, and Lindberg's raggedy, raw vocals and guitar work combining to form a sound that is both genuine and strangely familiar. Originals they are not, however, tracks such as "Winter Rain", "Girl On Fire", the latter blessed with a chorus part 'ala Foo Fighters meet Rhianna's Umbrella, if she had been the cool indie punk rock chick, should be enough to attract interest from near and far. Definitely worthy of your attention. Have a go at the White Limo via links below.
whitelimo.se
facebook
Posted by ROCKUNITED.COM at 11:43 PM