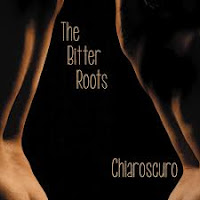 Rating: RRR
Label: TwoSideMoon 2012
Review by: Urban "Wally" Wallstrom
The Bitter Roots, a band from Seattle, US of A, consisting of vocalist/guitarist Jeff Stetson (ManSaveMan, Into The March), drummer ben Koostra (Silkworm, Ein Heit) and new bass player Don Allen. This is clearly a more experimental outfit than your average grunge act, introducing quite the vivid ideas together with a more eighties alternative approach, as the band draws from Punk, Metal, Garage, and lots of Pop.

The sound of the album, overall, is vintage indie alternative and recorded live in the studio to analog tape. Right, there's no click track, auto-tune, samples or basically anything post 1992. Indeed, old skool alternative, "Chiaroscuro" is a record which jumps all over it's influences and heroes. It's their third full-length release and late 2012 it reached #26 on the itunes New Rock chart and has been on the College Music charts across the states.

Here and there, they'll remind you of Surferosa (the album) and The Church, and in parts, you can pick up a definite liking for Seattle's pride and joy aka Kurt Cobain. Not too shabby,
http://www.bitterrootsmusic.com
facebook page

Posted by ROCKUNITED.COM at 6:11 PM