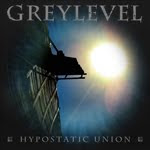 Oh... the melancholy of melancholic melancholia!!! Blimey, the music of Greylevel will bring the most upbeat person right back down to the ground and straight towards the abyss. Actually, "Hypostatic Union" reminded me of an episode of Father Ted (do a google if needed - it's a great U.K. TV comedy series of the nineties) where they've finally managed to cheer up this suicidal/depressed Irish catholic priest and he's on the bus on his way home looking forward to tomorrow... when the driver decides to play a music tape with Radiohead. Bummer indeed.

Greylevel play a progressive rock version of the above mentioned act also reminiscent to Porcupine Tree, Muse, and just a hint of Pink Floyd. The lyrics are thoughtworthy and the emotional pattern of synthesizers and keyboards are definitely all gloom and doom. It's heavy and dark (in the sense of being melancholic and sorrowful) and it's music that makes you take astand against everything you believe in as a human. Okay, clearly a bit too much and perhaps a too colourful description? But seriously, at the end of the disc, it's like if there's no future, no tomorrow, no meaning whatsoever and you might as well just lie in bed all day.

It's darkness and rainy days at the beach and all the tracks, from the opening "Memory Remains" to the closing of "Signals", speaks volume of massive grief and sadness. Cheerful buggers they are not and I could actually do with a pick me up song or a silly old tune such as "Cherry Pie". No, wait, Jani Lane's dead... crap, I think I'll just stay in bed for another month. Final verdict: Kudos to the Canadian act for coming up with a mighty decent sophomore release that literally transport the listener to a world of sorrow and hurt.

Posted by ROCKUNITED.COM at 7:09 PM