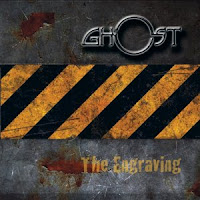 Not to be confused with the U.K. group nor any other spiritual being or dodgy movie of the past. It's all history and this is now. Well, not quite 'now', as in spring 2002 Kim "Ihzzy" Sandvik (vocals) and Oystein "Oyz" Wiik (guitars) got together and took the first steps of what would later become the Ghost. The result of what started out in the basement of Ihzzy's house in the country side of Norway, Nesodden, their self-released debut album, "The Engraving". It's hard hitting riffs and a punchy rhythm section behind the melodies and the band's nicely-crafted material comes across like the work of serious musicians and professionals.

They hardly sound like anything out of Norway though (style-wise). They're actually doing something similar to what metal acts from Germany (such as Accept, Bullet, Bonfire, and of course U.D.O.) did already back in the eighties. It's the old twin-guitar sound gone highwire and out of control. Kim Sandvik, definitely a deadringer to Bonfire's Claus Lessman (if he had a slightly more 'aggressive' Norwegian cousin) and there's quite a lot of "Don't Touch The Light" moments on this platter (the Bonfire debut from 1986). Add the more direct and blunt approach of Bullet and early Accept and you're sort of halfway there. Obviously never quite as good as above mentioned acts, but it has to be one surprise update this time, and this is it, mainly beacuse Ghost are actually pretty good without creating something extremely 'out of ordinary' or unique. It's simply just good, old, Melodic Metal of the past? The band will probably not agree with the statement thinking this is the latest s**t, but let's face it, fellows, we've heard it all before... still good though... pretty darn decent.