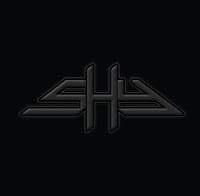 The unique voice of Tony Mills was the one thing that used to make Shy stand out among the competition and gave them an easily recognizable sound. Now that he's no longer in the band, the rest of the band had a difficult task in front of them - to re-introduce the band to the fans with a new, very different sounding singer. Sure enough, Shy 2011 sounds different, but what's important - it still sounds very good! Actually, the challenging situation has made the band stronger, and this self-titled album is far more satisfying an album than the previous couple of discs they made with Mills.

New vocalist Lee Small is definitely a different kind of singer to his predecessor, a bit in the vein of Glenn Hughes. Tony's high-pitched voice wasn't for everyone, but Lee's husky tones might have a wider appeal, so in a way he's a great choice.

When it comes to the music, the songs on this album are roughly in the same genre as the old Shy songs. Yet at the same time they sound different, as if the band had reinvented themselves. The "new" Shy is a bit heavier, should I say more "european" sounding, but on the other hand there are some really pop-styled melodies here and there. The guitars are more upfront, but so are the keyboards - both Steve Harris and Joe Basketts shine here.

There are no weak tracks on the album, but a few do stand out more than others. The opener "Land Of A Thousand Lies" makes it clear that this band is back in business. It's big, it's bold and the chorus is gloriously anthemic. Somehow it reminds me of Royal Hunt at their best. "Ran Out Of Time" is one of the more "vintage Shy" sounding songs, with plenty of keys and a strong hook, while the more mid tempo "Breathe" is a fine, moody song featuring a great vocal from Small. Fans of keyboards will probably fall in love with "Pray", which makes wonder whether Joe Baskett has more than two hands - there's a lot of ivory tinkling goin' on here! Those who are longing for the "old sound" there's the Journeyesque "Only For The Night" and the superb "Over You".

So… If I'm honest, I wasn't expecting that much of this album, but in this case it's nice to be proven wrong. Possibly the comeback album of the year and surely one of the Top Ten contenders.