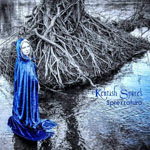 In a dodgy music culture and time when plastic and pace seem to be the new order, The Kentish Spires' approach to musicianship and recording is certainly worthy of some praise. They haven't gone apes**t over the compositions and there's plenty of space between all instruments, allowing all the band members to shine like radioactive cats in the dark. Everything is so friggin' clean and crystal clear that I couldn't help but think about the sterile landscape of atomic winter when I first heard it.

More than this? there's nothing? Oi! We're not talking about Roxy Music. It's the Canterbury-style Prog at full swing. However, the choice of sound and structure favours the quirky arrangements and that is clearly first noticed on the opening tracks of "Overture (instumental)" and "A Sea Shanty". They are both part of the trilogy of Knots. The experienced musician of Danny Chang (guitars, keyboards, producer), no doubt the Captain of the ship and he's taking his merry crew on a journey across the seven seas where you're not supposed to shoot the Albatross?

It's definitely also worth pointing out the Spires effective use of light and shade vs. the moody keyboards and woodwind. The cinematic "Horsa From Beyond The Grave" seems to be a cross or the bridge between the ancient year of 1970 and today, while "The Long Goodbye" goes through several different changes of Prog and Spacey Rock with an infectious melody. Vocalist Lucie is a shining star in the making and as the sound travels through the different years´of rock (even though it's mostly 70s styled prog), the album seem to have the confuse/intrigue thy listener as its official agenda of the day. Atmospheric Prog-Rock and moody fragmented musical arrangements constantly collide with experimental pieces and you can feel the force of all of them at once. Final verdict: Perhaps not quite as great as their debut. Still recommended if you're into Canterbury and old skool Prog though. thekentishspires.bandcamp.com/a> facebook.com/TheKentishSpires/a>
Posted by Urban Wally Wallstrom (RockUnited.com) at 1:58 PM