DUKES OF THE ORIENT: "Freakshow" 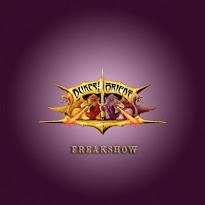 The Dukes of Hazzard? Nah. The Dukes Of The Orient is a collaboration between vocalist John Payne (ex-Asia, GPS) and keyboardist Erik Norlander (Last In Line, Lana Lane, Rocket Scientists) and it's apperantly a Freakshow??? They proudly proclaim on their opening number and I quote that "The Dukes Return" after years away on foreign lands and seas, we thought this day would never come! And now we're back, tell all who believed", end quote. Blimey. Is that really John Payne behind the microphone? The voice is certainly rougher and tougher than in the past. Still as good or nearly so, but not quite as high-pitched or baby-clean as we knew him on all those old albums.

What to expect soundwise on the record? Supertramp, quite a lot of saxophones, Soft Machine, King Crimson, Paice Ashton Lord, and obviously the odd Asia moment. The opening three songs "The Dukes Return", "The Ice Is Thin", "Freakshow" are more about the early 70's sound and more in the vein of Soft Machine, King Crimson, Paice Ashton Lord. I like it though. It's moodier, more complex and challenging than expected. Lots of Lord and Ashton moments to be found in the keys and arrangements. Track four "The Monitors" is more like ASIA and soft AOR and more direct and to the point. Darn catchy. "Man of Machine" goes through several different layers of Asia and symphonic, nearly Purple-ish rock.

"The Last Time Traveller" and "A Quest For Knowledge" are legitimate successors of John Payne's Asia. Classic synthesizers and keyboards are plenty and they do everything with a compelling sense of knowledge and know-how. It lays down the agenda for the album and the Dukes are no schmucks or hazzards for that matter. The instrumental "The Great Brass Stream Engine" give a nice tribute to acts such as Tangerine Dream, ELP, Soft Machine, and Ashton/Lord. Final verdict: professional done and executed. Kind of strange that you can still find these kind of albums in the year of 2020.