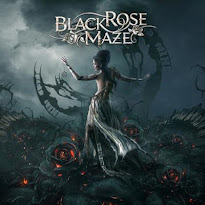 Black Rose Maze is french/Canadian singer Rosa Laricchiuta's all-female hard rock project. This Rose/Rosa is a songwriter and performer from Montreal, Quebec and rather famous over there afer spending precious time on the third season (2015) of La Voix, Quebec's version of the popular TV show The Voice. She released one album in the Quebec market and released her first English language album "Free", in 2017. Not sure why Laricchiuta decided to release this platter via frontiers but hey, what ever floats the boat or whatever.

Opening number "In The Dark" is like a massive flashback attack of the early 2000's. It's Anastacia vs. Evanescence rock and that's including the dark production and lyric that goes on about the destructive and controlling freak. I really enjoy the song "Free", written by Rosa and originally on the 2017 album? It's a nice little semi-ballad that reminds us of Alannah Myles. Another Laricchiuta' original is "Look At Me Now" that speaks about pain and suffering and I quote, 'Who died and made you King? Your words counts for nothing'. Once again, like the slightly heavier/darker version of Anastacia? I hope you recall Anastacia? Left Outside Alone? Massive voice, massive success in the early 2000's. Rosa is like a distant hard rock cousin singer-wise and the proper belter I may add.

Unfortunately. There's too many generic moments inbetween the nuggets and something like "Let Me Go" is sadly poor. "Only You", written by Cliff Magness and not one of his best compositions, sounds again like Anastacia vs. Evanescence. "Earth Calling" is plodding at its best/worst and we've heard it all before. The shocking poor piano ballad "Call Me Now" should never have been allowed to enter the studio in the first place. Geez. Many ups and downs on their debut and not quite the 5 R's and rating that we expected. Final verdict: Great singer, kudos to the all-female band, but not really the strong material in the end. Ciao Rosa! No wait... that's not the correct language... then again... I'm pretty sure it is...