ARCTIC RAIN: "The One" 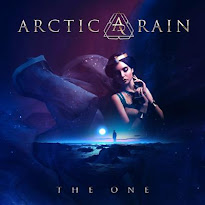 Arctic Rain from Sweden? One quick glance at the track listing and you already know what to expect really. Seriously. Titles such as 'Love Of My Life, Night After Night, Give Me All Of Your Love, Breakout, Madeleine, Take Me To Your Heart', etc. It's like reading the same old story all over again. It came from the 80's - the paint by numbers AOR book that gave all the kiddies plenty of blank moments and crayon smeared fingers. That's a bit harsh, especially since it's a rather catchy and innocent little platter.

The very definition of Scandi-Rock and somewhere down the same road as Bad Habit, Creye, Crystal Blue, Dalton, and Glory (the first album). Innocence would be the keyword here and they're almost too caught up in their own interpretation of not sounding too sinister or dangerous. Believe me, you won't find anything too loud, scary or out of the box on 'The One'. It's safer than your safest safe, which hold your most cuddly duddly fuddly wuddly teddybears and overall kid friendly AOR. Bassist Gert Daun is the experience musician with a background playing with Horizon, Andromeda, Falcon, etc. and vocalist Tobias Jonsson certainly have the pipes and stamina for singing the blues... ehh, AOR.

Keyboardist Pete Alpenborg has an track record of working with acts such as Revolution Saints, House Of Lords, Issa, Toby Hitchcock, Sunstorm, Kee Of Hearts and many more. In fact. Take on third each of Bad Habit, Glory, Treat, and you'd end up with 'Madeleine' and 'Take Me To Your Heart'. It's weird though. The two best tracks on the record are both stuck at the very end of the album? What's up with that?? They both have more stamina and energy than the rest of the album, which is still a nice but frankly a bit too sterile effort. But seriously. This is the kind of Scandi-rock we prefer and opener "Love of My Life" wouldn't sound out of place on the Dalton or Bad Habit album of the eighties. Perhaps it's nitpicking since I can't find anything to really complain about. Then again. I've heard it all before... oh feck... it's catchy, fun, and just a tad too predictible. Yet close to 4R's... go figure. https://www.facebook.com/arcticrainband