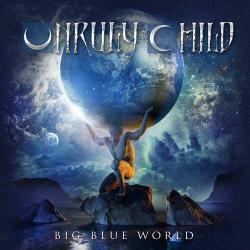 The unruly children have always been driven by the power of melodic melodies and soft rock. Let's face it. Music can by something as direct as one chord hitting just the right nerve at the right moment or as simple as a group of people coming together to create the rather sophisticated rock album. Uber glossy and simply filled with great vocal harmonies, "Big Blue World", takes its listener on a ride throughout the poppy melodic scene and car cruising moments under the cover of the bright neon lights.

So.. is it all good, all GTA Vice City, all bright lights, AOR music to move your feets? This time around we'll be Breaking The Chains? Are these words enough? Well... let's see if she floats. It's really not about the one-hit-song rather than a decent and safe pop/rock album effort with plenty of layers and clever arrangements. Perhaps a tad too clever at times? Something like, "All Over The World", tend to get on your nerves with its "hey-look-at-me-stuck-in-second-gear-going-nowhere" kind of beat. "Beneath A Steady Rain", again, uber slick and the harmonies are straight out of AOR heaven. It's just a wee bit too pretencious and this particular piano ballad goes straight to the recycling bin. It's second rate Michael Jackson meets Celine Dion music and not even the great legend that is Marcie Free (King Kobra, Signal) can save it in the end. On the other hand... the following track, The Harder They Will Fall", featuring the classic Winston Churchill speech as also used by Iron Maiden, rawks nicely along the road.

The majority of the tracks are just too "middle of the road" and we really do expect more and better from the otherwise great Guy Allison and Bruce Gowdy. Me thinks the band should do what others (sorta') did in the past and put a disclaimer sticker on their product saying, "This album in no way endores a disbelief in the sophisticated and safe". Because that's the final verdict of the album -a wee bit  too sophisticated and safe.
Posted by Urban Wally Wallstrom (RockUnited.com) at 1:54 PM