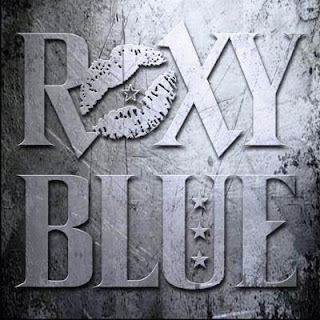 Want Some? Sure... but the cheesy introduction might just do the trick? Seriously, I did not see this coming and I doubt that many or any folks did? Originally signed to Geffen Records and brought to this world on a rocket ship full of hairspray and party hardy songs, it's a completely different trip and space walk in the year of 2019. In fact. Simply forget about everything you might recall on the subject of Roxy Blue or songs such as Too Hot To Handle. They now look, sound, and play their vicious US of A music as if they were crazy post-WWIII bikers on speed?

No doubt vocalist Todd Poole is mad and angry at the world? He screams, spits, and howls like a man possesed. Poole says: "I think the new record is definitely a different sound than the 1992 version of ROXY BLUE, but not unrecognizable. The new record is much heavier, but still has some cool ballads and hints of early ROXY in there. I feel that it's a well-balanced record". Well... let's just say that the aggressive biker sleaze vs. Hinder rock have absolutely nothing in common with the Warrant vs. Bulletboys debut of the past. Surely they tried to be Van Halen, but they sounded more like Bulletboys, and that's never really a good sign in my books.

The self titled release in 2019, the new start and also the new sound. The opening tracks, "Silver Lining", "Rockstar Junkie", "Scream" are all modern sleaze numbers. Hardly any harmonies or singing guitars, merely blunt and aggressive stuff lacking both finess and hooks. Why the comeback and new music as Roxy Blue when it has very little or nothing to do with what the 92 version of the band brought us? Let's face it, it's mostly about nostalgia and old fans anyhow. Then again, perhaps the truth is rather... they were never really that great in the first place??? facebook.com/OfficialRoxyBlue
Posted by Urban Wally Wallstrom (RockUnited.com) at 1:52 PM