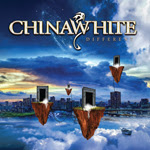 Hell Yeah!!! This is a lot Different from the poor work of Challanges. It's been nine long years since I trashed their previous effort and gone are all the elements which made me dislike the album. The sick sounding hammond, the horrible mix, the stale arrangements. To be frank. Chinawhite are more or less reborn and US vocalist Phil Vincent (Tragik, D'Ercole - AOR underground hero) literary the icing on top of the cake. Vincent, the v-e-r-y confident singer and very much on top of things throughout the album. Experienced drummer Hans in´t Zandt (Praying Mantis, Mad Max, Vengeance) give extra oomph to the material.

Do however not expect them to sound like in the 90s. The Saga inspired rock is no longer relevant and you could almost put them up their against the likes of Saracen, Demon, Nightwing, and just a hint of Dare, but merely their 1991 album 'Blood From Stone' and not the rest of their back catalogue. It's sort of aggressive Symphonic Rock of the eighties... but on steroids. Not quite "prog rock" and neither simple straight rock. Nothing too disturning and perhaps still too soft in the ears of the blunt metal head?

I like the new Chinawhite though and it's definitely their best work up to date. Peter Cox is still the leader of the gang/main songwriter, and his guitar work on the record, slightly more aggressive than in the past. At times perhaps a tad too much upfront in the mix, but that's nitpicking. Always able to create the occasional hit song, it's not until now they've managed to maintain the standard throughout a whole album. For instance, Hello To The World", the 50/50 mix of Queensryche's soft moments during 'Empire' and the work of Boston and Tom Scholz. Sure, not quite as superb, but neither too far away. "Wings of the Wind" was also present on their previous album 'Challenges'. It's completely 'Different' as Cox felt the song deserved better. So they added new lyric and vocal melodies, Phil did an amazing job and the harmonies are just great. Final verdict: Have a go at something "Different" if you're into aggressive melodic symphonic 80s rock on steroids (yeah... I know).
Posted by ROCKUNITED.COM at 4:06 PM