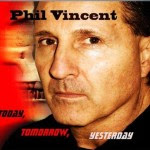 "Today, Tomorrow, Yesterday" - is that a threat or the warning? or simply just an honest expression or the cold hard fact? What's the difference anyhow? We are all buggered since it's Phil Vincent's 22nd solo album and he simply won't go away no matter what you throw at him. Hairspray cans, bananas, grenades, simply won't do the trick anymore as the Melodic Rocker is the last man standing after the total atomic annihilation (I've been playing way too much Fallout).

Some of his solo albums and good, some are not, and others are just too vivid and scewed. This belong to the latter category and it's almost like if Phil's been going bezerk in the studio and throwing any musical genre to the wall/tracklisting just to see what sticks? One minute it's soft yacht-rock, the other punk, the next Heavy Metal, AOR, NWOBH, 70's Queen, argh, it's really difficult to keep track of the moodswings and it can make you feel exhausted. I believe it's the old saying of 'damned if you do, damned if you don't', only this time it's both at the same time? How could you otherwise explain the anger of ehem, yes, "Feel Your Anger" and the ballads "Loss (Part 1) – Hole In My Heart" and "Loss (Part 2) – One Day, We'll Meet Again". Part 1 is indeed slighly rockier where as Part 2 is gentle piano tinker and soft rock.

The 22nd album leads to several questions such as: Who are Vincent trying to compete with here? What market is he aiming for? Are we supposed to be confused? Sure, rock legends such as Queen, could most of the time, but not always, get away with constant tempo and genre changes. But that's mostly down to their wicked melody and vocal arrangements and the fact that 4 different musicians/writers did their own magical thing. Here you have one slightly mad and outrageous indie rocker going all-in with a pair of twos'. Final verdict: Not all bad, but not enough of quality to explain the moodswings.